But it’ll be her first time in front of thousands of fans. Massacci has played slow-pitch softball for more than 20 years, and she currently plays in a league at Packard Park. 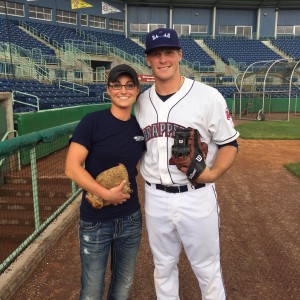 “I’m nervous to throw the first pitch,” Massacci said. “Throwing a hard baseball is not the same as throwing a soft one.”

The electricians’ presence at the game will begin at the gate with members passing out branded flying discs to fans, and carry on to the field as Massacci throws the ceremonial first pitch. The group also has signage on the dugout roofs and an ad in the game program.

Even though Massacci got some practice with Scrappers catcher Jack Goihl during the team’s Media Day, she hopes that her one shot at a first pitch doesn’t fail.

Massacci will be joined at the game by family, friends and coworkers.

The Scrappers game Friday will begin at 7:05 p.m. against the West Virginia Black Bears, and the game will be followed by a fireworks display.