On a picture-perfect night in front of more than 5,000 opening-day fans, the final 5-0 score in favor of the Jamestown Jammers was the only downside in an otherwise successful Mahoning Valley Scrappers game, sponsored by the NECA-IBEW Electricians.

The collaboration of electrical contractors and union electricians from the Mahoning Valley brought 100 friends and family members to the game, distributed glow-in-the-dark Frisbees comprising all the member contractors’ names, and watched 8 year-old Heaven Doss from Big Brothers Big Sisters throw the ceremonial first pitch on the group’s behalf.

Further, as part of its sponsorship, NECA-IBEW Electricians was tied to the night’s postgame fireworks display during several announcements made before and during the game, and had a hand in two between-innings promotions – one enabling lucky fans sit in VIP dugout seats for the fireworks show, and the other involving a fan guessing the title of electrical themed music played over the public address system. 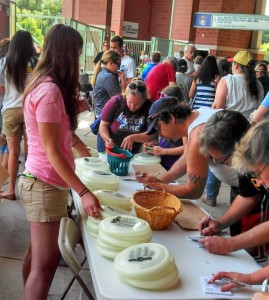 It was the second straight year the group had a strong presence as a Mahoning Valley Scrappers sponsor. Last year it purchased the rights to design the tops of the home and visitors dugouts, a spot it renewed this year to help further promote its member contractors and union affiliation.