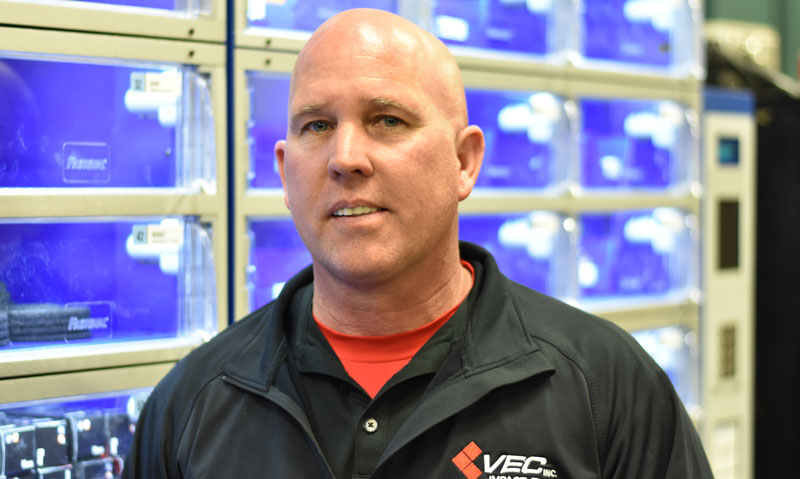 As he’s progressed up the career ladder, Curt Nickerson has had the opportunity to run many high-profile jobs, both locally and out-of-state.

This past December, Curt Nickerson, field superintendent at VEC, Inc., was honored as the company’s 2018 Foreman of the Year. It’s the second time he’s won the award throughout his 16-year career with the company.

“Receiving the Foreman of the Year award is gratifying,” he said. “It shows that your peers respect you. I always try to do the best that I can do. Within these four walls [at VEC], there’s a lot of talented leadership. To be among one of those and be the top guy for 2018, it’s a great honor.”

Growing up in Malden, Massachusetts, Nickerson set his eyes on joining the United States armed forces after graduating high school. From 1986-1990, Nickerson was a member of the U.S. Marine Corps., and was stationed in California and Okinawa, Japan.

“It taught me tact, how to be responsible, how to grow and have attention to detail. It was the best experience of my life and taught me how to be a man.”

After serving in the military, Nickerson relocated to Ohio and began his career in the electrical trade, working as a residential wireman before being accepted into the commercial electrician apprenticeship through the Youngstown Area Electrical JATC.

“Being a part of IBEW Local 64 was a great honor,” Nickerson said. “I was taught leadership and all the skills that you need to perform well in this industry.”

During the final year of his apprenticeship, Nickerson was assigned to VEC, where the bond between him and the company was instantaneous.

“I immediately started to run work when I came here,” he said. “VEC has treated me very well, and I just like the leadership and team atmosphere. Everybody helps everybody, and I really enjoy that.”

As he’s progressed up the career ladder, Nickerson has had the opportunity to run many high-profile jobs, both locally and out-of-state.

“I did the Hollywood Gaming at Mahoning Valley Race Course with approximately 78 workers on the project. That was a two-year commitment. Recently, I’ve done a rolled aluminum factory in Owensboro, Kentucky, where I was in charge of approximately 150 people. So, every project I’ve done is passionate to me because my goal is to get the job done on time and with customer satisfaction.”

“We are doing the 138,000-volt distribution coming into the plant,” he said. “It’s a big project with milestones that need to be hit.”

Each day, Nickerson strives to grow as a leader and guide the apprentices and journeymen he interacts with.

“Being a leader means you need to put people where they’re best suited,” he said. “You have to run the job as part of a team. Without that atmosphere, failure could happen. Having a strong team is key for the customer, IBEW and the contractor.”