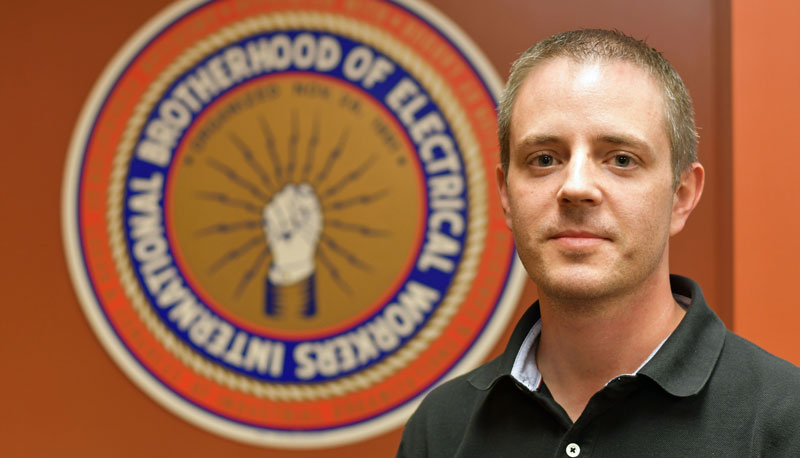 After starting his career working for a non-union contractor, Mark Phillips switched over 11 years ago and went through the electrician apprenticeship at the Warren Electrical JATC.

In his new role as president/organizer at IBEW Local 573, Mark Phillips has a specific goal – educate others about the upside of joining a union.

“I see in my age group and younger that unions are falling out,” he said. “I want to educate people about what our union offers, and the whole union aspect in general. People are just uninformed about what we are, which is a brotherhood and sisterhood.”

And the biggest selling points to educate people on are the IBEW’s full benefit package and on-going training opportunities, Phillips says.

“People are able to provide for their families with solid pay rates, a retirement plan, and health and welfare,” he said. “Our training is very hands-on. Whether it’s for apprentices or journeymen electricians, we teach the most up-to-date methods to stay competitive in the Mahoning Valley.”

Growing up in a family where his grandfather was a union steelworker, Phillips always knew being part of a union would define his career choice.

“I looked at skilled trades, and the first thing that came up was getting into the union,” he said.

After starting his career working for a non-union contractor, Phillips switched over 11 years ago and went through the electrician apprenticeship at the Warren Electrical JATC.

Along with his new role as president/organizer, Phillips also serves on the IBEW Local 573 executive board. He believes it’s crucial to provide support to his fellow brothers and sisters.

“I feel like I can do that more in my new role,” he said.

When he’s not working, Phillips enjoys spending quality time with his wife, Samantha, and two sons, Anthony and Dominic, who are involved with youth baseball and soccer.

“My kids really enjoy it,” he said. “It’s been very wonderful for our family.”

Phillips also plans on teaching his sons about Local 573 and the importance of the union.

“I want to show them how it’s provided for our family, and they can do the same for their families when they get older,” he said. “I hope a lot of people find it that way, and we can get more people in the union.”