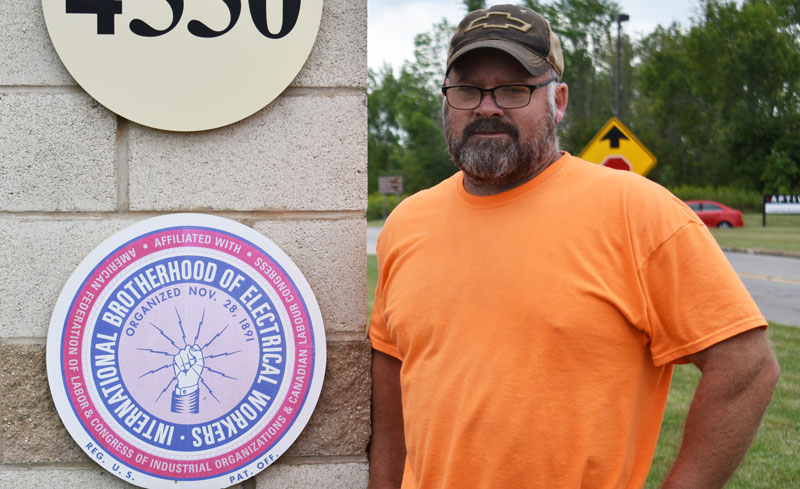 Tom Yekel, a member on the apprentice selection committee with IBEW Local 573, feels the ability and willingness to learn is one of the keys to success in the electrical trade.

Throughout the history of IBEW Local 573, three generations of the Yekel family have made an impact as journeyman wiremen.

Tom Yekel has been in the electrical trade for 21 years, following in the footsteps of his grandfather, Thomas J., and father, Thomas E.

One of Yekel’s favorite moments as an apprentice was working with his father.

“He was a foreman on a Copperweld job,” Yekel said. “After that, I worked with him a little bit at Cortland Delphi.”

Yekel believes it took a delicate balance to separate home life from work.

“Working with my dad was kind of different,” he said. “He’s the mentor when you’re at work, but when you’re at home, he’s your dad. I had to break that barrier somehow, and it was easy to do. I respected him at home and at work.”

VIDEO: Tom Yekel discusses his career as a journeyman wireman

Additionally, Yekel credits his success in the electrical trade to those who paved the way for him.

“When I first got in, there was still a lot of what I would call ‘old timers,’” he said. “Those were the people you were going to learn the most from I believe. I credit my career to them.”

Throughout his career, Yekel has been fortunate to work on a multitude of projects.

His most recent project was the Lordstown Energy Center, where he was the general foreman overseeing the completion of the combined-cycle power plant.

“I really enjoyed that project.”

In addition to mentoring apprentices on the job site, Yekel is on the apprentice selection committee with IBEW Local 573.

“I really enjoy looking at these kids when they come in, and seeing them after we’ve accepted them,” he said. “It’s great seeing them a year later and how much they’ve progressed.”

There is also one distinct factor Yekel looks for when evaluating potential candidates.

“Something you look for is if they have the ability to want to learn. If you want to learn, somebody’s going to teach you.”

Yekel feels the ability and willingness to learn is one of the keys to success in the electrical trade.

“You learn and see a lot,” Yekel said. “I believe you can learn something from everybody.”