Cody Hilliard is that much closer to the $30,000 prize waiting for the winner of the Ideal Industries National Championships, a first-time skills competition among electrical tradesmen, after winning the Northeast Ohio regional title.

Hilliard is a third-year apprentice with the Youngstown Area Electrical Joint Apprenticeship and Training Committee (YJATC) in Boardman. He’s an IBEW Local 64 member and is currently working with NECA-IBEW Electricians member electrical contractor “Joe” Dickey Electric on a major renovation of the Downtown Youngstown YMCA. 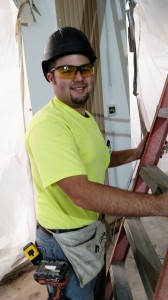 Youngstown JATC electrician apprentice Cody Hilliard advanced to the finals of the Ideal Industries national championship in Florida after winning a regional competition against his apprentice peers in October.

“I’m decently competitive, but I didn’t think I had a shot to compete nationally because there were so many people up against me. I certainly didn’t expect it,” Hilliard said.

At the regional earlier this month hosted by Graybar, Hilliard, who is competing in the Student/Apprentice division, bested the competition by completing a defined set of tasks in a mere 42 seconds; five seconds faster than the next best competitor.

The tasks involved cutting, stripping, terminating and testing wires and connections using Ideal tools. Hilliard won a 13-piece Ideal toolkit and an all-expenses paid trip to Orlando to compete in the National Championships at Disney’s Coronado Springs Resort against 66 other Student/Apprentice peers from around the country on Nov. 11-12.

[Do you have what it takes to join our apprentice program? Find out here from our current classes.]

“We’re thrilled for Cody and to have a representative at the national competition,” said Ed Emerick, YJATC training director. “Cody’s accomplishment speaks volumes not only for his own aptitude and passion for his craft, but for the quality of instruction he’s receiving both in the classroom and on jobsites working alongside our journeymen.”

Hilliard agreed that his apprenticeship has prepared him well, both for the Ideal competition and for his career as a journeyman electrician.

“The classroom gives you that solid foundation of electrical principles, and when you’re working in the field, that’s where you work with experienced guys who take the time to help you understand both the ‘how’ and ‘why’ you’re doing something, and that helps you continually improve,” Hilliard said.