While the seniors are making final plans for starting their careers, the juniors are positioning themselves for what they need to do in their final year of high school to land the careers they want.

“It’s a great group of kids, and we fielded a lot of questions from the juniors asking what they have to do their senior year to be most prepared,” said Eric Davis, Warren Electrical JATC training director, who was part of a panel discussion on apprenticeships at Trumbull Career and Technical Center in Warren. 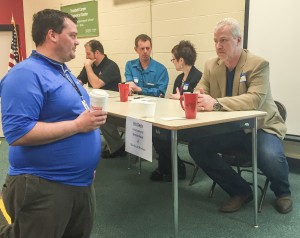 Eric Davis, far right, talks to a prospective student at the TCTC panel discussion on building trades apprenticeships. Davis is the training director at the Warren Electrical JATC. 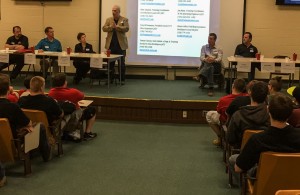 More than 150 TCTC students learned about building trades apprenticeships at a panel discussion at the school. Warren Electrical JATC training director Eric Davis was among the presenters.

Davis gave an overview of the electrical apprenticeship programs, which include a three-year residential track and a five-year inside commercial sequence.

“We spent a good amount of time covering the ‘earn while you learn’ concept versus the traditional college route,” Davis said.

The Warren JATC program includes 40 hours of paid work per week alongside journeymen electricians on real construction sites, and two to three nights per week in classroom settings. Instead of accruing student loan debt, apprentices earn generous paychecks and are eligible for health and pension benefits right from day-one.

“For these students who are already taking courses that may lend themselves naturally to the trades, there’s a clear pathway from career prep to apprenticeships,” Davis said. “We’re here today to help them see their future and hopefully interest them in a rewarding career as a union electrician.”