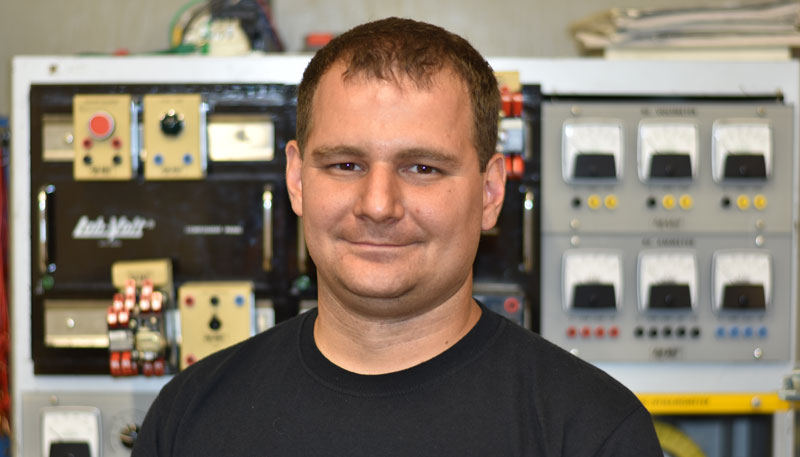 Russ Sansosti is currently wrapping up his fifth year in the commercial electrician apprenticeship. Before applying, he completed the residential apprenticeship and worked as a journeyman for five years.

Whether it’s as a commercial electrical apprentice or behind the wheel of a sprint car, Russ Sansosti excels when putting his mind to the test.

“The automobile is something that I love. If it’s got four wheels, it’s for me.”

As a youngster, Sansosti’s passion for sprint cars began to shift into gear, thanks in large part to his grandfather.

“My grandfather always owned them,” Sansosti said. “As I was growing up, I showed interest that I wanted to drive one. We had enough parts to put a car together and he said, ‘If you do the work and have the car done, when you turn 16 you can go racing.’”

Sansosti had the car finished a year early at age 15.

“It was tough,” he joked. “I kept changing pieces and parts on it to improve it.”

When he’s got the pedal to the metal, Sansosti says he’s locked into a different mindset.

“Racing alone is something most people don’t understand,” Sansosti said. “It’s a feeling that when you get in that car, it clears your head and nothing else really seems to matter except for how you’re going to make the car go into the corner and be faster.”

The passion for racing is also something Russ shares with his wife, Amanda.

“She works on the cars with me,” he said. “It’s a lot of fun sharing this experience with her.”

Over the last 15 years, Sansosti has hit dirt tracks around the region as a sprint car driver. With almost 1,000 races under his belt, he has clinched two wins in the 305-racing division. He is still searching for one elusive victory.

“I’m still looking to capture my first win in the 410 division.”

There’s another item on Sansosti’s mind he is looking to capture – his journeyman’s card.

He is currently wrapping up his fifth year in the commercial electrician apprenticeship. Before applying, Sansosti completed the residential apprenticeship and worked as a journeyman for five years.

“My dad was influential in pushing me toward becoming an electrician,” Sansosti said. “This is where I could work and learn.”

Over his 13 years in the trade, Sansosti has learned how valuable the classroom education from the Youngstown and Warren JATC can be.

“The little things we are taught in class leads into what we do in the field,” he said. “From how to be safe to cutting a plug into a wall, you learn it through the apprenticeship.”

Sansosti has worked on many projects throughout the Mahoning Valley as an apprentice, recently at the new Doubletree by Hilton Youngstown hotel.

One of the projects he was grateful to work on was the Youngstown Area JATC building.

“I was a third-year apprentice when that building went up,” he said. “It was nice to see the whole job start to finish, and it’s our union hall.”

For those interested in joining the electrical trade, Sansosti offered ways to succeed in the field.

“Having a good work ethic and showing up wanting to learn every day,” he said. “If you’ve got mechanical ability with your hands and can think on your feet, this is a good trade to get into.”