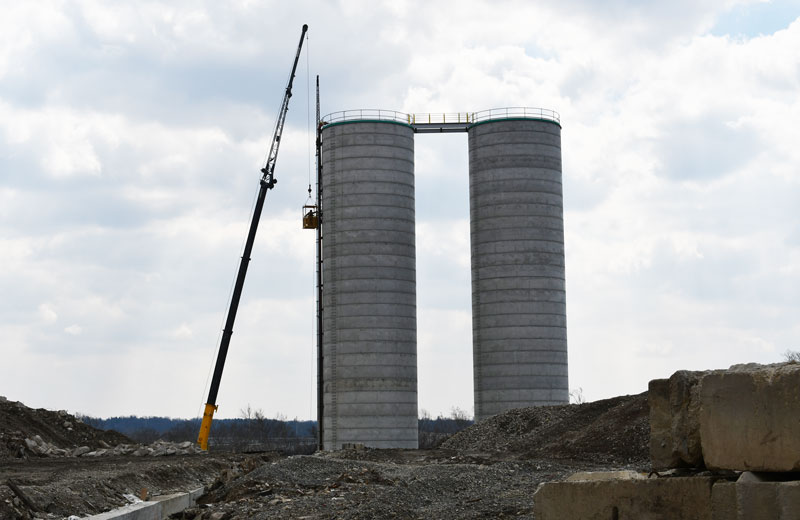 Once the project is completed, a train car will need to pull up to the right section of a rail station and line up with limit switches. From there, an operator will be able to push a button to start the process of moving powdered cement mix from the train.

As work continues on a silo project for City Concrete, Jason Rubin, president of CR Electric, couldn’t be happier with how everything is coming together.

“We actually put our design together on paper with the controls, control cabinets, control centers and service,” Rubin said. “Now, we’re at the point six months later, we’re building the project here on-site in downtown Youngstown.”

Rubin said CR Electric first sat down with City Concrete, looked at their design and took it from there.

“When the job first started, the customer came to us looking to do a design-build project to bring in cement off of a train, install into silo towers and then be delivered by truck afterwards.”

Once the project is completed, a train car will need to pull up to the right section of a rail station and line up with limit switches. From there, an operator will be able to push a button to start the process of moving powdered cement mix from the train.

The cement will be sucked down a duct system about a quarter mile in length to two silo towers, each standing 180 feet and able to hold 4,000 tons of cement.

“They wanted it where it would all be automated,” Rubin said. “Basically, a one-push button will send a car into the right progress and ship the cement down through the piping.”

“Those are kind of the brains of the operation,” Rubin said. “We have our VFD drives, computers and fiber optic in there. Those will communicate with everything out here to know where the cement is at, how fast it’s being moved and how it’s filling up in the silos. 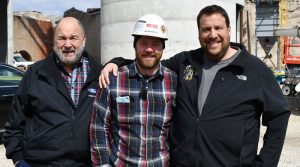 (From left to right): Marc Rubin, Bob Thomas and Jason Rubin stand near one of the 180 foot silos that can hold up to 4,000 tons of cement mix.

Rubin’s father, Marc, has played an important role throughout the project.

“He sat down with the customer to see how they wanted to have the plant run,” Rubin said. “He worked on the design and drawings to get us blueprints for the electricians to install.”

Rubin also noted how the weather has been an interesting factor to deal with.

“We’ve had major rain, snow and ice this winter,” he said. “We’re hoping to get power turned on in maybe two weeks. Once the power is on, we can start doing our check-outs on different motors and controls and go from there.”

Initially, CR Electric went through over 100 drawings, which was then whittled down to 14 final drawings.

“We’ve basically taken a design, something new as far as working with cement, and brought it to a whole new level for CR Electric,” Rubin said. “We want to show our customers what we can do. Taking a project from design phase off paper, build our drawings out and get it working together.”