More than 50 Trumbull County guidance counselors were put to the test this week to see how much they knew about building trades apprentice programs.

As part of an event hosted by the NECA-IBEW Electricians at Squaw Creek Country Club in Vienna, guidance counselors from nearly every school district in the county heard from Warren Area Electrical JATC Training Director Eric Davis and counterparts from other building trades in an effort to recruit qualified apprentice candidates from local schools.

Where would “first-year journeyman electrician” rank among a list of college undergraduate majors with the highest starting salaries?

Less than half of them knew the correct answer was “A,” and that an electrician can make more than $50,000 a year plus benefits after they complete their apprenticeship. That salary ranks electricians among college majors like civil engineering, computer science, finance and accounting. 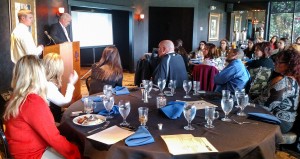 In addition to the trades being well-paying careers, Davis opened some eyes about union apprenticeships’ low cost to attain, the availability of jobs, high placement and completion rate, and the number of college credits an apprentice can earn during the program.

“Getting in front of guidance counselors with our message is where we need to be,” Davis said. “What we learned was many of them didn’t know everything we had to offer, so we hope they go back to their respective schools and help raise awareness about careers in the building trades and steer qualified candidates our way.”

Dana Butto, math supervisor for the Trumbull County ESC, took an interest in the math component of the standardized testing that apprenticeship programs require as part of the application process.

“This is very good information for our schools to know about, and we need to hear this from industry. We can take this back to our students and teachers, and emphasize why it’s important to have a command of the math concepts they’re being taught in school,” she said.

Many guidance counselors were interested to learn an electrician apprentice earns nearly 60 hours of transferable college credits during the course of a five-year apprenticeship, leaving them a mere six classes away from an Associate’s degree.

Guest presenter Tom Wylie from JATC partner Northwest State Community College covered the specifics of how union apprenticeships can be a springboard to a college degree.

“In Germany, trade apprenticeships are held in high prestige, but in the U.S. it means you didn’t do well in high school,” he said. “That perception needs to change because there are rewarding career opportunities in high-demand industries for these individuals.”