More than a dozen members of IBEW Local 573 in Warren spent part of their Saturday morning hanging flower baskets in and around Courthouse Square in downtown Warren, carrying on a tradition in memory of a deceased former member, Bill Horton. 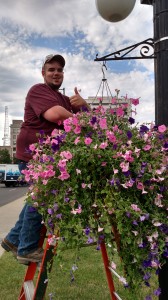 Jake Gerlock, IBEW Local 573 apprentice, was among the IBEW volunteers participating in a community service project in Courthouse Square in Warren.

“Bill was a special guy, and this was ‘his project’ as part of the Trumbull 100 group,” said Mike Nemkovich, president, IBEW Local 573. “It’s our pleasure to continue to do this in his honor.”

Members hung dozens of baskets around the square just as other volunteer groups from throughout Trumbull County carried out other beautification projects at the same time.

IBEW 573 is part of NECA-IBEW Electricians, an association of union electrical contractors and electricians in Warren and Youngstown.