There was a light rain falling on Eastwood Field July 4 that caused a slight delay and a modest restructuring of how 16 military heroes were going to be honored before the Mahoning Valley Scrappers game that night.

But it would take a lot more to put a damper on the enthusiasm the thousands in attendance showed to these war heroes from our own hometowns. 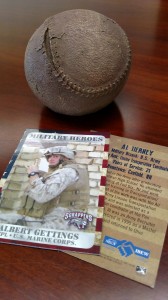 Sixteen local military heroes were honored at the July 4 Scrappers game, and NECA-IBEW Electricians was a sponsor of the commemorative card set given to fans.

Each recognized veteran was commemorated within a special card set given out at the game. And while the back of the card included our logo inset on the lower right because of our sponsorship and support of the night’s promotion, the truly important part was the description of each veteran’s heroic activity.

“When we heard about the Scrappers planning to honor local military heroes at the July 4 game, we immediately jumped on-board to be part of it,” said Jack Morse, business manager for IBEW Local 573 in Warren. “Our members and contactors have the greatest respect for those who’ve served, and to be given the opportunity to make the community more aware of these soldiers’ bravery and heroism was something we were honored to do.”

Accomplishments among the honorees included a National Defense Service Medal in Iraq; Bronze Stars in Afghanistan; Purple Hearts, Bronze Stars and Combat Infantry Badges in World War II; and a Silver Star in Vietnam, among many more.

Jack Houck (left) and Leslie Parkey were among the local military heroes honored at the July 4 Scrappers game.