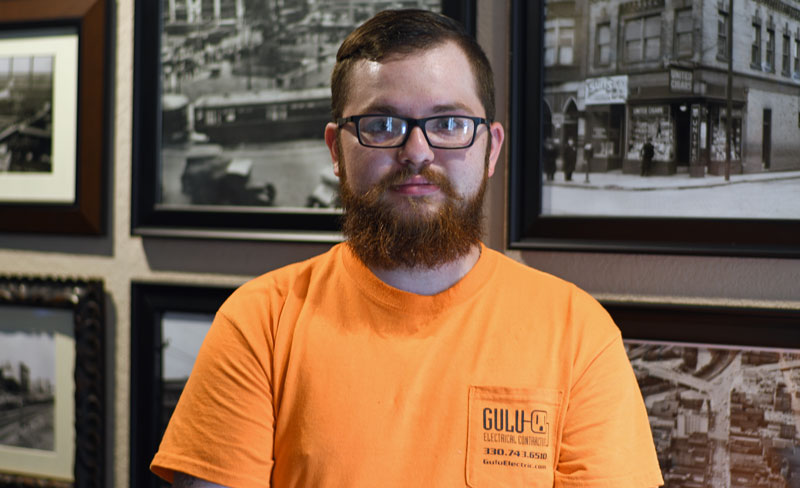 First introduced to the electrical trade during his time at a vocational school, Jim Touville (above) enjoys the hands-on aspect of being a journeyman electrician.

Along with topping out to become journeymen electricians, two electrician apprentices through the Youngstown Area Electrical JATC were recently honored as the Outstanding Apprentices of the Year.

“The award is given to the outstanding apprentice in each classification – the five-year commercial/industrial program and three-year residential program,” said Ed Emerick, training director for the Youngstown Area Electrical JATC.

In each graduating class, an individual is selected based on criteria such as grades, weekly and monthly work reports, and class attendance.

“Our database captures and calculates all that data, giving us a percentage,” Emerick said. “Then, our committee selects the recipients based on that information.”

“Getting the Outstanding Apprentice award was definitely a surprise,” said Touville, who recently topped out as a journeyman electrician. “I come to work each day and do everything I can to get the jobs done fast and in an orderly manner.”

Touville was quick to credit his classmates, citing the close bond they shared throughout their apprenticeship.

“It was a group effort to finish the apprenticeship program,” he said. “My classmates deserve this award just as much as I do.”

First introduced to the electrical trade during his time at a vocational school, Touville enjoys the hands-on aspect of being a journeyman electrician.

“I’ve never really been a suit-and-tie kind of guy,” he said. “I like working with tools and have always been mechanically inclined.”

Looking ahead in his career, Touville said he would like to apply and become a commercial electrician apprentice someday.

“I really enjoy all the pipe bending and wire running.”

“You have to remember where you came from,” he said. “Winning this award will help me teach apprentices everything they need to know to succeed in their career.”