His first year in business was just him and one apprentice, and Joe Dickey recalls making about $30,000 in revenue. Today, 60 years later, the company employs around 100 on a regular basis and upwards of 350 during bigger projects.

The size and scope of the electrical projects has grown dramatically, as well. While Dickey Electric still offers competitive rates on residential electrical work it’s also among the biggest players locally for the largest commercial and industrial jobs. 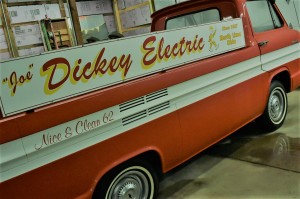 Joe Dickey Electric, a NECA-IBEW Electricians member contractor, is marking its 60th year in business in 2017.

Throughout its history the company has worked with JCPenney, General Motors, St. Elizabeth Hospital and many of the area’s steel mills and prisons, and dozens and dozens more. It’s also completed projects on the East Coast, Michigan, Chicago, Puerto Rico and South Korea.

Joe is still involved in the business as the company’s chairman, and he’s stayed involved simply because he still enjoys the work. And the people.

“Getting work in the construction business is a lot of fun,” Joe Dickey said. “After we accomplish some of this work I go see it and it makes you feel great. The talent of some of these people that we’ve hired is unreal. I’ve gone on a job and thought I knew everything, but I found out if I left this guy alone he’d do a better job than I could do.”

“His work was so good, and his customers would have their own plant or tool and die shop, so they’d say ‘Joe, you did such a good job on my house, can you come to my plant?’” said Dave Dickey, Joe’s son and current CEO. “That’s when he started branching out and getting foremen and superintendents on jobs so he could start growing the business more.”

Dave has been with his dad’s company since the 1980s, but still marvels at the example his father set establishing the business’ culture.

“A lot of our customers are our friends, and they turn into our friends because of how closely we work with them,” Dave Dickey said. “And our employees are family. You feel an obligation to do right for both of them.”

Dave is credited with expanding the company when he came inside in 1984; growing the business from 14 employees to 100.

“When I came in I wanted to go into the industrial field,” Dave said. “Dad used his wisdom and led us that way. And he let us make some mistakes. In the end it’s exhilarating when you feel the excitement about going and getting the job; getting started and then finishing the job; and having a customer when it’s all done.”

Growth continues, Dave said, because of the company’s emphasis on staying current and adopting new technologies early, from fiber optics in the 90s to preventative maintenance, infrared testing and diagnosing systems today.

“We were always ahead of the curve,” Dave said. “It takes risk, and my dad gave us the ability to take that risk. And that’s why our company propelled.”

In Part 1 of our series on “Joe” Dickey Electric we explored the ups and downs of the company’s first year in business.

In Part 3 we’ll celebrate the career of the company’s founder in “Joe Dickey, the Legacy.”