Joe Dickey and his young family had just gathered around the table for Thanksgiving dinner one day early in the company’s history when a customer called the house in a panic.

Joe’s son Dave, age 4 or 5 at the time, jumped in the truck and headed to Columbiana with his dad to see what they could do. After a quick check, Joe was able to get the oven working long enough to finish cooking the holiday meal. 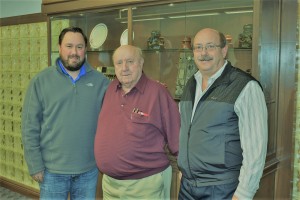 (from left) Eric Carlson, Joe Dickey and Dave Dickey have built Dickey Electric into one of the Mahoning Valley’s premier electrical contractors, both in the field and in the community.

Such is the way of life for Joe Dickey and how he built a successful electrical contracting business.

“Wouldn’t you know, two weeks later he calls me back,” Joe said. “He had a plant in Columbiana. He says, ‘Joe can you do industrial work, too?’ I says, ‘Anything you need.’ We’ve been down there ever since; Columbiana Foundry. He never forgot that.”

Dave Dickey said the holiday interruptions were a common occurrence, but they were never a bother.

“I don’t think there’s ever been a holiday where someone didn’t call us saying they needed a breaker or some part because their family was out,” Dave said. “And it might have put our family out, but it’s what you do.”

Joe’s legacy as founder of 60 year-old Dickey Electric is one of a community servant and accomplished contractor.

While Joe helped put the Mahoning Valley chapter of the National Electrical Contractor Association on the map with his leadership positions in that organization; and while both he and his son Dave have been inducted into the Academy of Electrical Contractors, it’s his work in the community that he’s most proud of.

“Dad always said you can’t take all the time. You’ve got to put it back in. He’s been a very big philanthropist throughout his life,” Dave said.

Joe’s service includes 18 years as chairman of the board of the Erie Shriners Hospital, the longest term ever served. He’s also been active and involved with the Masons, Butler Art Museum and countless fundraising initiatives in local schools and communities.

Eric Carlson, recently named president of the company, said the Dickeys set the example of the importance of giving even before he started working for them during his high school years.

He was 13 and working on his Eagle Scout project. His father worked for Dickey Electric at the time and approached Dave to try and raise a couple bucks toward helping his son build a foot bridge over a creek in a local park.

Dave instinctively instructed him to “Go down to the nearby lumber yard and get every piece of material you need – every board, every screw, every nut that you need, and you bill it to Dickey Electric,” Carlson recalls his father telling him.

In Part 1 of our series on “Joe” Dickey Electric we explored the ups and downs of the company’s first year in business.

In Part 2 we explored the business culture at Dickey Electric that helped he company grow and flourish throughout its 60-year history.