For John Harnar, the secret to business success has everything to do with his team.

“Keep them safe. Keep them working. Keep them happy,” the operations manager of Main Lite Electric said. “The rest is like dominoes.”

Main Lite’s safe, working and happy employees have generated a great deal of success for the electrical contractor, with average revenue increasing from $750,000 in 2008 to $5 million in recent years. The company, which specializes in transmission and overhead distribution in the eastern United States, retains 30 full-time employees and 60 employees strictly for storm work. 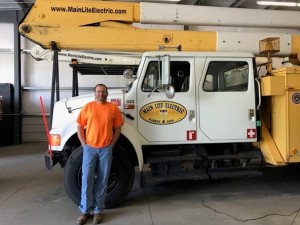 Main Lite Electric of Warren is best-known for its specialty electrical services like overhead line construction, transmission and distribution maintenance.

“With that, we’ve expanded by purchasing vehicles and equipment, and we moved our main office,” Harnar said.

The headquarters is located on Sferra Avenue in Warren, and is complete with plenty of room for equipment and trucks, comfortable offices – and fold-out couches in the offices of Harnar and Finance Manager Kevin Beil.

“When we started expanding, we got into chasing storms and weren’t well-equipped for sending guys out. Kevin and I would come in the middle of the night to get stuff ready and would end up sleeping on concrete floors,” Harnar said with a laugh. “When we moved to the new building, our first purchase was fold-out couches for the both of us.”

The story goes along with Harnar’s promise that he will never have anyone do anything he wouldn’t do himself. He started managing the business in 2000, fulfilling his longtime goal of running a successful company.

Main Lite’s story began in 1988 with a vision by JeNell and Frank Massuri.

Main Lite’s story began, though, in 1988 with the vision of JeNell and Frank Massuri.

“I was working for another company that was going out of business,” Frank Massuri said. “And there weren’t too any companies that did traffic lights and high-voltage work at the same time.”

The Massuris seized the opportunity to fill that gap and start their own company. In the beginning, the licensing, bonding and insurance processes were challenging. As time went on, Main Lite started seeing more competition and endured the typical issues that arise on projects from time to time.

But the good times made the trials and tribulations of business worthwhile.

“The Christmas parties, those are probably my best memories,” Massuri said. “Just everyone getting together and having a good time.”

In 2008, the Massuris transferred ownership of the company from JeNell to their daughter Toni Harnar, and to Colleen Beil. Toni Harnar’s sister Tracy Raschilla, is also involved as office manager and EEO officer.

Frank Massuri remains involved as a consultant for the company, and also handles all things golf-related.

“I just got done playing golf today, I played yesterday and I’m going to play again tomorrow,” Massuri said with a laugh.

John Harnar said, “Years ago, in the late 90s, shortly after I got married, Frank told me, ‘If there is anything I want you to learn from me, don’t let anyone ever make you feel guilty for golfing, and that includes your wife.’”

“And my wife is his daughter,” Harnar said, laughing.

As Massuri enjoys a well-earned retirement, the family business is in good hands. Main Lite has an impeccable safety record with no lost time incidents since 1998, loyal clients such as First Energy, and a good standing in the industry.

“I would say our reputation has helped us to grow,” Harnar said. “That’s probably the biggest factor.”