Warriors come in all sizes … and ages.

For the Lucas family of Canfield, they range from 9-year-old Austin to the IBEW Local 64 union brothers of father Kenny, a journeyman wireman with Girard electrical contractor CR Electric.

Austin was diagnosed with autism when he was in kindergarten. 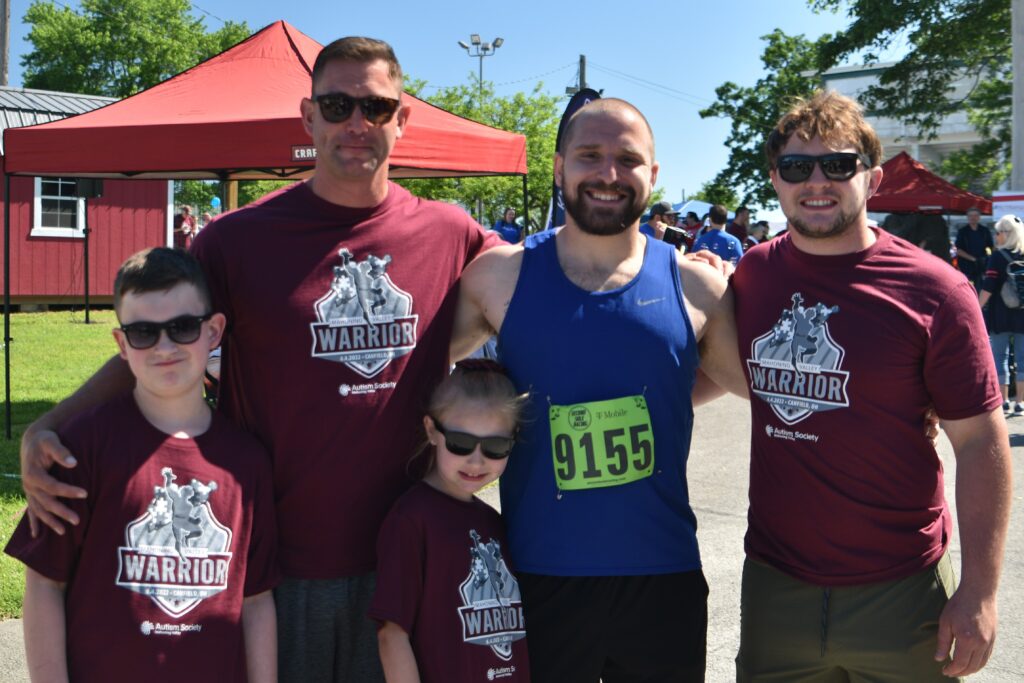 Pictured left to right are Austin Lucas, Kenny Lucas, Raegan Lucas, Peter Barone and Kirkland Grahovac. The group was part of a dozen IBEW-affiliated participants in the Warrior Event by the Autism Society of Mahoning Valley.

“We want each of our members to know we are there for them; that the word ‘family’ encompasses the brotherhood showing up for each other,” said Cody Hilliard, Local 64 president and membership coordinator. “We want to see everyone succeed, from our members to their families at home.”

The event, held at the Canfield Fairgrounds, was hosted by the Autism Society of Mahoning Valley. The sponsorship was credited to Austin’s fundraising team.

Kenny’s fellow IBEW Local 64 members Peter Barone, an electrical apprentice at Santon Electric, and Kirkland Grahovac, an inside apprentice with University Electric, participated in the event as athletes.

Barone ran in a 5k to support not only the Lucases, but also for his own family. Two of his nieces are autistic.

Grahovac attended to support the Lucas family, with whom he’s gotten close.

Ashley Lucas, Austin’s mom, beamed about how Austin has formed a bond with so many of Kenny’s union brothers, including Grahovac, Hilliard and Hunter Axelson.

Kenny Lucas expressed his gratitude for IBEW Local 64 members rallying around his family.

“This is awesome. It’s supposed to be a brotherhood. It’s great they are here helping to support a great cause,” he said.

Ashley said it’s the memories that mean a lot.

“It’s all these little moments. When you see members do this, show up to support or bond with one another, it’s amazing. It’s one of life’s greatest joys. Austin gets so excited to see these guys,” she said.

In appreciation for the IBEW’s support and the LMCC’s sponsorship, Austin surprised them with a custom wooden sign he and his mother made of the group’s logo.

“Austin’s gift will have a permanent and prominent spot on my office wall, and it will serve as an inspiration for me every time I look at it,” Hilliard said.

Ashley has leveraged Austin’s interests in woodworking and electricity, and incorporated them into teaching moments for her son. The family has also created a bit of a side business out of what they create: A and R Designs. 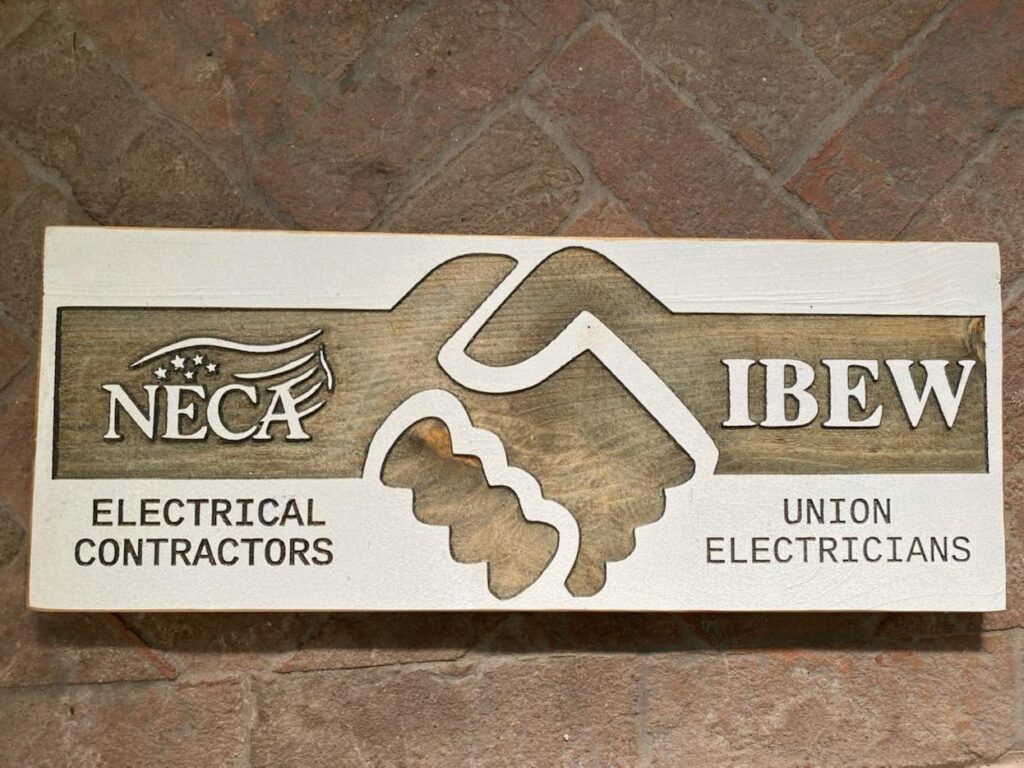 Austin Lucas is the son of journeyman electrician and IBEW Local 64 member Kenny. Austin, who has autism, makes wood signs on a CNC machine like this one he made especially for the NECA-IBEW Electricians Mahoning Valley chapter.

Austin is involved in every step of the process from concept to design to sales, including at the Youngstown Flea. Ashley said he not only learns how to run a business by doing this, but it also helps him get more comfortable communicating with people.

Each sign is unique, “just like Austin,” Ashley Lucas said. “No two things we make are the same.”

Catch Austin at the Youngstown Flea and on Instagram with the handle @aandrdesigntogether.

Austin Lucas, 9, works on a sign for his family business, A and R Design.