It was while he was enrolled at Youngstown State University that Ahren Peplow realized college wasn’t for him.

“I bounced between nursing, education and criminal justice majors,” he said. “I couldn’t find anything I truly enjoyed. Then I remembered I took a residential wiring class in high school that I loved,” Peplow recalled.

He got into the Youngstown Area JATC apprenticeship program and becoming a journeyman electrician in 2016.

“I love my job. I don’t hate getting up and going to work in the morning,” he said.

For Ahren Peplow, a journeyman electrician with University Electric, his career is something he enjoys doing every day.

Adding to his enjoyment from his career, Peplow sits on the board of IBEW Local 64’s Health and Welfare Committee.

Making decisions on benefits, the role is sometimes a bit tense.

“You have to make hard decisions sometimes,” he said, but it was an opportunity he took to get more involved with the union and give back to its members.

Electricity runs through the Peplow bloodline.

During World War II and the Korean War, Peplow’s grandfather, William, was an electrician, working on a destroyer during WWII.

When William came home, he enrolled in lineman school through Ohio Edison, and did that for 30-plus years until he retired in the early 1990s, Peplow said.

Looking back, there is a moment he treasures while the two were discussing the electrical trade one day.

“He took me downstairs and gave me his original multimeter he used in World War II, and his original Green Lean knockout set from the 1950s,” Peplow said.

“It was a really cool memory.”

Both vintage tools are on display in Peplow’s basement today.

Keep an open mind when it comes to careers

The racino in Austintown has been Peplow’s favorite job to-date.

“It was so big and crazy and new for the Mahoning Valley, something we never saw before,” he said.

“That was my first time being on a very large project. It had a different atmosphere. I learned a lot and met a lot of people,” Peplow said. 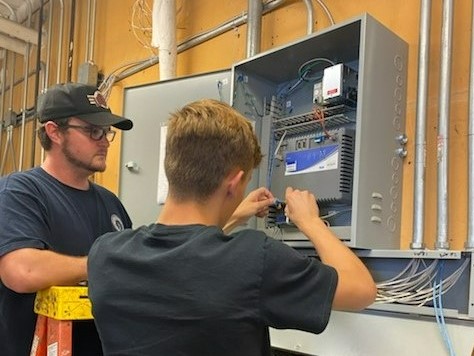 Through his apprenticeship with the Youngstown Area JATC, Ahren Peplow, left, was able to meet others in the electrical industry early in his career.

He encourages anyone of any age looking for a change to give the electrical industry a try.

“You never know where life is going to take you. I had no idea where life was going when I started YSU in 2009,” Peplow said.

As a result, being an electrician has taken him to some cool places, he said.

“I get to see things only a small percent of the population have seen,” he said, including the inner workings of a sewage treatment plant and the ceiling at Stambaugh Auditorium in Youngstown.

Peplow advises that electricians should be willing to learn.

“You don’t have to be an expert and know everything, but just be open and eager to learn what you can as you progress.”