The Mahoning-Trumbull AFL-CIO Labor Council executive board collected toys for underprivileged children in Mahoning and Trumbull counties at the organization’s Christmas dinner last week; the 10th straight year it has done this. 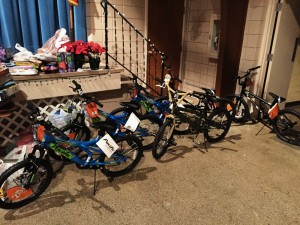 Jack Morse, business manager for IBEW Local 573 in Warren, and his colleagues on the local’s executive board donated bicycles for the second year in a row.

“These bikes will really make a difference in these children’s lives, and my fellow board members and I are proud to be a part of that,” Morse said.

IBEW Local 573 is a key component of NECA-IBEW Electricians, an association of union electrical contractors and IBEW locals in the Mahoning Valley.

The bicycles, which will be given to children who reside in a shelter for battered women and children in Trumbull County, are part of a larger donation of more than four truckloads of toys being given to various organizations in Mahoning and Trumbull counties from the local AFL-CIO council.

“Homeless children don’t have much else besides their clothes. They’ve lost their home and their future is uncertain. For them to get a nice toy or a bike at Christmas is really something special,” said Bill Padisak, Mahoning-Trumbull AFL/CIO president. “It’s nice for our members to be able to help those in need over the holidays, although they do it year-round.

“We have an active group of union counselors who build wheelchair ramps, hold fundraisers for people in need and perform many other community service activities. The Western Reserve Building Trades are a large part of that work.”

The Mahoning-Trumbull AFL-CIO Council is the local arm of a federation of labor unions that represent working people.