Canfield Rotarian Anthony Nocarato wanted to go out with a bang after growing the Canfield Lighting of the Green event for 10 years, and his parting contribution was leading a committee to help power the north end of the green in the center of town.

“Five years ago we added electricity to the south end, but I’ve always had a desire to light the north end, as well,” Nocarato said. “With the efforts of several Rotarians who helped raise the money, and the assistance of Santon Electric and the union, we were able to do it.”

This month, a crew from Santon Electric has been installing new electrical service and individual power circuits throughout the north end of the green. The local LMCC also contributed to the project.

“The project involved adding 100 amp pedestal service and receptacles under several trees, which will be used for Christmas decorations and other community events,” said Joe Santon, site foreman.

While improving the annual Lighting of the Green was the impetus for the project, Nocarato hopes it has an even greater impact in the community. 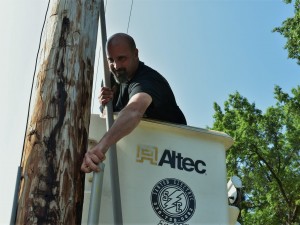 “We think this project will allow us to enjoy the spaces we have even more by expanding existing events like the Fourth of July parade, Junior Women’s League Fall Festival and concerts in the summer,” Nocarato said.

This year’s Lighting of the Green is scheduled for Dec. 1.

Santon Electric is a member contractor of NECA-IBEW Electricians, an association of IBEW union electricians in Youngstown and Warren, and signatory Mahoning Valley electrical contractors. 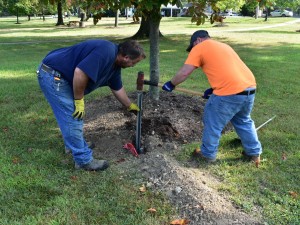 Wiremen Terry Anania (left) and Mark Richmond install one of the receptacles going under trees on the north end of the Canfield green.