The bright lights outlining the façade of Stambaugh Auditorium’s Fifth Avenue entrance are the work of member-contractor, University Electric.

Eric Jay, Vice President for University Electric said planning for the project began in 2018, while execution did not begin until 2021 and their work on the project was completed in 2022.

The overall project consisted of replacement of the grand stairwell on the Fifth Avenue side as well as construction of an ADA-compliant ramp, lighting in the rear entrance’s promenade and exterior lighting, according to the Stambaugh Auditorium webpage. 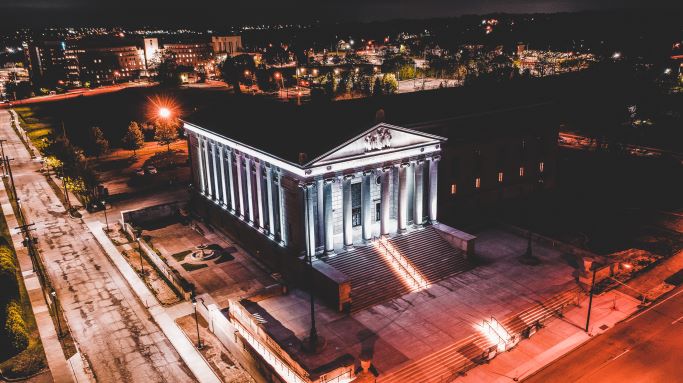 LED lights that dance in the dark

Electrically, a “snow melt system for the new ADA ramp, a custom lit handrail for the ramp and grand stairwell, as well color changing lights all around the main section of the building” were installed, Jay said.

The real stars of the show are the color changing LEDs on the East and West facades.

Installed to light the columns, the customizable LED lights both on the façade and along the top of the building allow for the fixtures to be individually controlled to have their own colors. Jay says the lighting is programmable and can be used to show “dancing” or “chasing” effects of the colors. 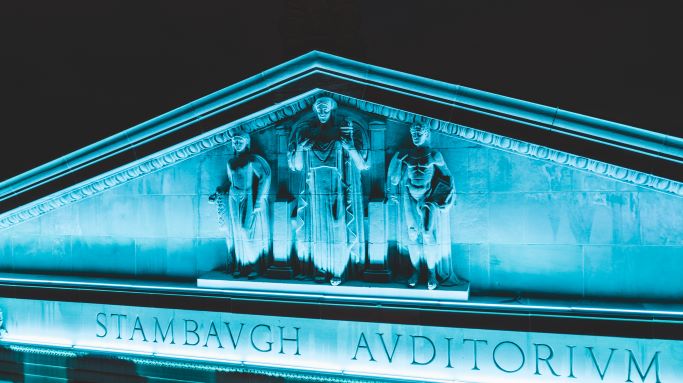 Shown are the LED strip lights installed glowing in a green hue.

“It’s a very unique system that the owner can really have fun with if a client wanted a specific color scheme for their event at Stambaugh,” Jay added.

Due to the complexity of the building’s original construction and wanting to keep the electrical work as hidden as possible, the project was different than others University Electric has completed.

“We spent a lot of time before the project started getting into all the nooks and crannies of the structure, familiarizing ourselves with electrical routing to ensure the lights are the only aspect visible to the public,” Jay said.

After such an involved project, the team is happy to know that their work has restored the grandeur of Stambaugh Auditorium.

“Our office is near the facility, and it brings us great joy to see it all lit up every time we drive by it early in the morning on the way into the office or on our way home,” Jay said.

University Electric is a member contractor of NECA-IBEW Electricians, an association of Mahoning Valley signatory electrical contractors, IBEW Local 64 in Youngstown and IBEW Local 573 in Warren.