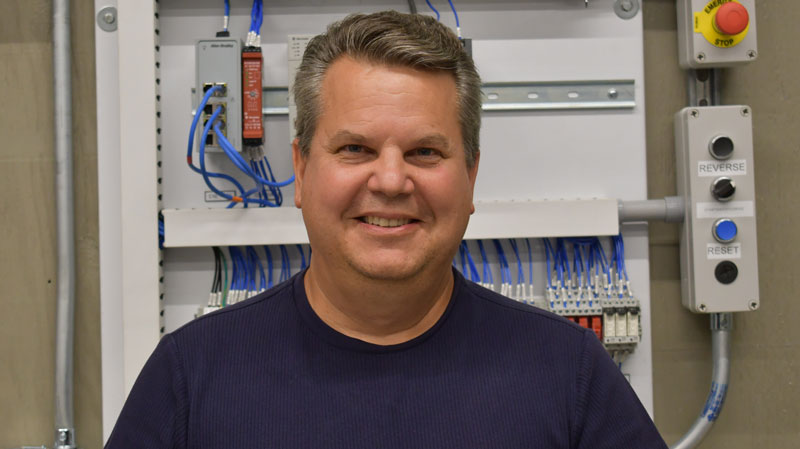 After topping out, John Grivensky worked as a journeyman for two years before setting a goal to become a commercial electrician apprentice.

For more than 30 years, John Grivensky has been setting and accomplishing his career goals in the electrical trade.

Grivensky’s passion for the electrical field began when he was a stock boy at Strouss’ Department Store.

“There was a maintenance guy there who did electrical work on the side and for people in the store,” Grivensky said. “I told him I was interested, and I tagged along with him on a lot of jobs. I was his helper and it got me interested in [the electrical trade] as a career.”

With his father having a background in the trades as a union bricklayer, Grivensky knew to follow his desire of becoming an electrician.

“My father walked me across the union hall to see Bill Lyden at the time,” he said. “I introduced myself and told him what I wanted to do. He said, ‘Listen kid, stay in school.’”

Grivensky continued on at Youngstown State University in pursuit of an electrical engineering degree.

“My parents always taught me that you have to go to school. Whether it’s trade school or college, you’re going to go to school because you can’t be successful in life unless you have an education behind you.”

When it came time, he applied and interviewed to become a residential electrician apprentice. Unfortunately, he was not accepted into the program at that time. But, an opportunity came up to work as a truck driver for Geller Electric. The following year, Grivensky was accepted into the residential apprenticeship while also going to YSU part-time.

“I would go to apprentice school on Mondays and Wednesdays. And on Tuesdays and Thursdays, I would take my college classes.”

After topping out, Grivensky worked as a journeyman for two years before setting a goal to become a commercial electrician apprentice. Five years later, he topped out with his journeyman’s card and graduated from college with his degree in electrical engineering.

“The greatest feeling of accomplishment is becoming a journeyman and working on your own,” he said. “Accomplishing the work and knowing that job is going to remain and be there forever. It’s almost like an adrenaline high you get from it. It’s really enjoyable.”

Looking to achieve his next goal, Grivensky decided to switch gears and become an electrical inspector.

“I was a journeyman and I kept wanting more. I was going to become a contractor, or I was going to do something else. You need to keep pushing ahead to achieve more.”

Over the last 18 years, he’s relished the opportunity to visit various job sites in his inspector role for Central Electric Inspection Bureau.

“Every job out there I look at as my own job,” he said. “You’re a part of the design and always talking about it, offering what you can and cannot do. Every job becomes yours.”

In the next 5-10 years, Grivensky hopes to get his professional engineers stamp and license.

“I would like to move more towards the design end. It’s always stepping ahead.”

In addition, Grivensky is a part-time instructor with the Youngstown Area Electrical JATC. He feels a great sense of pride in mentoring young apprentices.

“When these guys achieve their goals and become successful, it’s nice to say I had a part in their future.”

As for the wisdom he imparts in the classroom and on the job site, it all comes down to one successful trait.