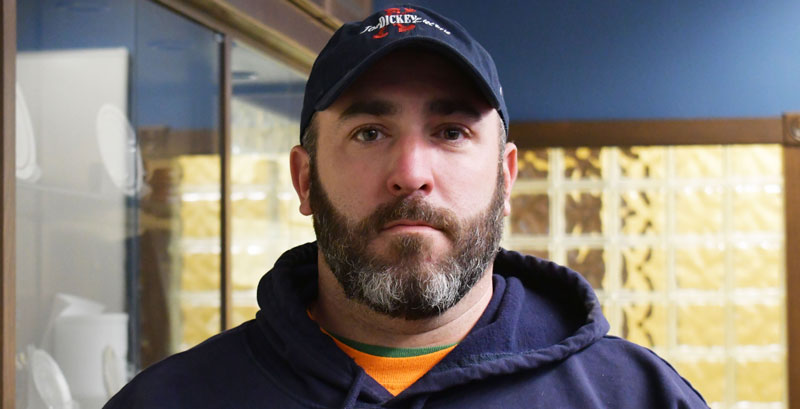 Before he grabs his whistle for practice, Boila straps on his toolbelt for “Joe” Dickey Electric as a journeyman electrician, a career decision sparked by his grandfather.

The city of Struthers holds a special place in Ray Boila’s heart. It’s his hometown and where he lives with his wife, Jackie, and two sons. It’s also where he gives back to his community, both on the football field and baseball diamond.

As a youth coach for the Struthers Little Hardhats, Boila helps instill the very same lessons he learned as a child on the gridiron.

“Football is a sport that I loved to play,” he said. “I enjoyed it and it’s one where I could repay what coaches taught me. I help the kids get better, so they have a chance to succeed in life and football.”

Boila’s two sons got him involved in baseball, now as a coach and trustee for the Struthers Baseball League.

“I never played baseball, but it’s something cool too,” he chuckled.

The most enjoyment for Boila comes from the simple interactions with the kids before and after practice.

“The excitement being around the kids and hearing their stories. For some of the kids, you’re kind of like a father figure to them. They look up to you and you try to guide them the best you can.”

One of the biggest lessons Boila tries to teach his players is perseverance, a trait that helped them mightily this past season.

“This year, our team won the championship in football,” he said. “But we lost in Week 7 and our kids were down. We told them, ‘Hey that’s life and you get knocked down. You need to get back up and get on the horse.’”

The Hardhats learned from that defeat, beating that very same team to clinch a championship.

“It was very cool,” Boila said.

Before he grabs his whistle for practice, Boila straps on his toolbelt for “Joe” Dickey Electric as a journeyman electrician, a career decision sparked by his grandfather.

“My grandfather was an electrician for the U.S. Navy in World War II and when he got back, he worked at a mill. His regret was never ever becoming an electrician [back home], so that kind of guided me this way.”

Going through the residential and commercial electrician apprenticeships at the Youngstown Area Electrical JATC, there was one big factor that left an impression on Boila.

“Definitely the friendships,” he said. “You bond with your classmates by doing homework together and working on various projects. It was a great experience.”

As a long-time journeyman electrician and member of the apprentice committee that selects future electricians, Boila also helps steer young apprentices in the right direction career-wise.

“I try to guide them and keep them moving forward so they have a long, successful career.”

For those interested in joining the construction trades, Boila says don’t think twice about it.

“It’s the best decision I’ve ever made in my life. It’s a great career and every day you’re doing something different and learning something new.”

Drawing parallels between athletics and the electrical trade, Boila believes it takes hard work and trust to succeed.