There’s a “new” face at the IBEW Local 573 union hall in Champion.

On Friday, July 8, Todd Ambrose was sworn in as the new business manager/financial secretary for a three-year term.

At the top of his priority list: building on the “brotherhood” aspect of the organization.

“I want to put the time and effort in to do the best job I can to represent members of Local 573,” Ambrose said. “I’m here. I work for the members.”

Ambrose wants everyone, from members to administration to office staff, to enjoy coming to work.

“You want to have a great relationship amongst each member,” he said. 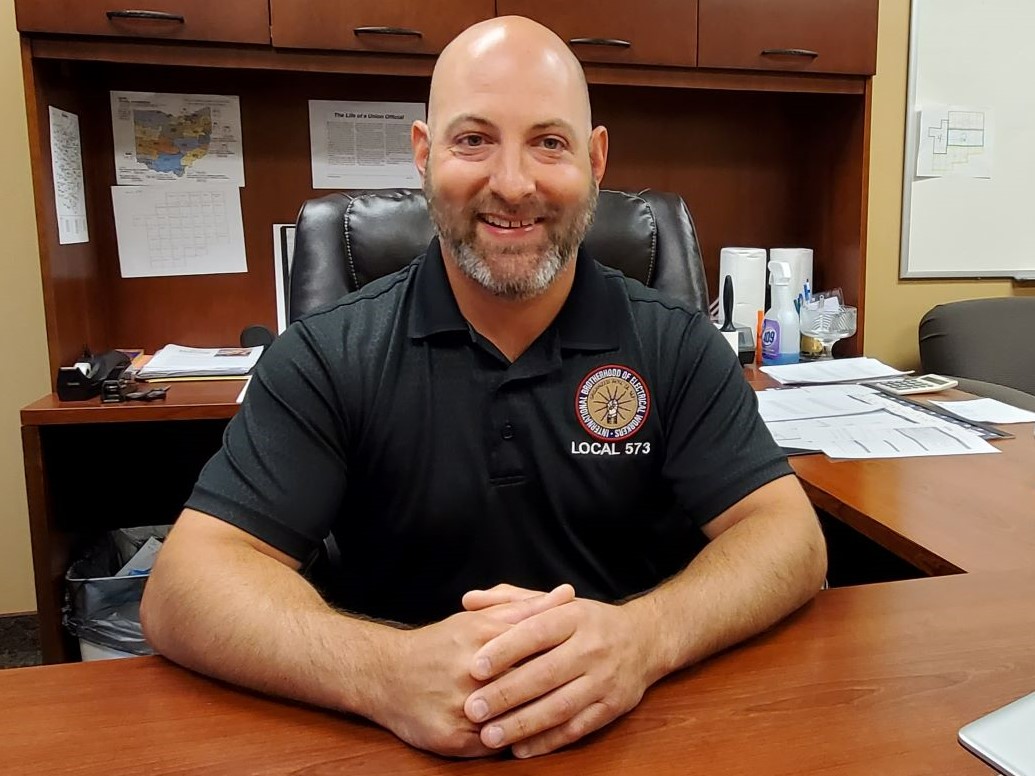 Right off the bat, that bond is noticeable within the electrical apprenticeship program.

There are young, promising apprentices who are forging what Ambrose wants to see union-wide: a camaraderie-type dynamic.

That’s an important component, Ambrose said. As the aspiring electricians continue their careers, they’ll make themselves and Local 573 even stronger.

The energy is adding more spark for Ambrose to continue building on the already-boosted morale.

He’s already collaborating within the Local to plan more picnics, parties and the upcoming 100-year-anniversary of Local 573 in April 2023.

While at the end of the day everyone is working, Ambrose wants everyone to enjoy what they do.

“To work with your best friend, joke and laugh… That’s what makes a job,” he said.

“Being on a site that you aren’t thrilled about can be that much better having a close friend working alongside you.”

Learning about the Local

Education about the inner-workings of Local 573 is a priority, too.

Ambrose wants to bring more pension-related knowledge among other facets to members, especially those who are newly organized and didn’t complete a local apprenticeship.

To include everyone, Ambrose is applying his years of experience.

He’s been with Local 573 for 20 years, including when he began his inside/commercial/industrial apprenticeship.

When he became a journeyman electrician, Ambrose got involved within the union, serving as vice president and as a member of the apprenticeship committee.

In 2020, President Mark Phillips appointed Ambrose to the negotiating committee for the inside agreement.

While he’s worn many hats through his career, being a job steward is among the most crucial in helping prepare him for becoming business manager.

“Spending 20 years working with people, you learn their personalities,” Ambrose said. “Working out of town sometimes, too, has helped me gain perspective” to become a leader.

Working outside the Mahoning Valley, there is something that Ambrose noticed right off the bat: work ethic.

“We have some of the hardest-working people I’ve ever worked with,” he said.

That’s shaped by the range of work that stretches throughout the Mahoning Valley, from hospitals to schools to stores to battery and nuclear plants.

“This area just has a lot of diversity with the type of work. It creates great journeymen.”

The trades’ work grind was instilled in Ambrose from a young age. His father was a pipefitter, so he had an understanding of how trades worked growing up.

Ambrose and his wife, Melany, have a daughter, Maddie, who is in her first year at Syracuse University.

In his spare time, Ambrose enjoys golfing, traveling out west and spending time with his dog.

As he continues to get settled, Ambrose wants Local 573 members to know if they have any questions, they can reach out to him.