He’s amassing quite a hardware collection, and by all accounts at the July Mahoning Valley NECA chapter meeting he’s well-deserving of these and many more. 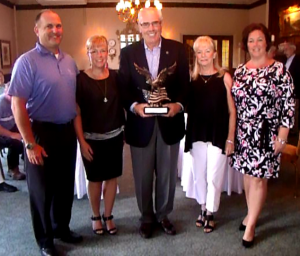 Rex Ferry, owner and CEO of VEC, Inc., was presented the James Robert “Bob” Pritchard Electrical Industry Award with his family by his side from a distinguished group of executives from the NECA national office in Washington, D.C.

The Pritchard Award recognizes an individual in District 2 who by his/her actions has advanced the electrical contracting industry beyond any normal call of duty or loyalty. The award was announced in March, and was presented this week at a special ceremony among his local peers.

VEC Inc., based in Girard, is the parent company of Valley Electrical and Evets Oil & Gas, NECA-IBEW Electricians member contractors.

“I thought he had won every award that we had, but we found one he hadn’t,” said John Grau, CEO of NECA.

Established in 2004, the Mahoning Valley NECA chapter is the only one with repeat winners of the Pritchard Award. Joe Dickey Electric’s Joe Dickey, Jr. won the award in 2006. 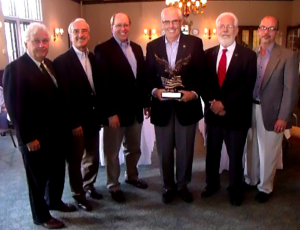 Ferry entered the electrical industry as an apprentice with IBEW Local 573 in Warren, Ohio. Prior to purchasing VEC in 1990, he worked in all areas of the electrical construction industry. He’s served in numerous NECA capacities throughout his career, including a term as the association’s president starting in 2009.