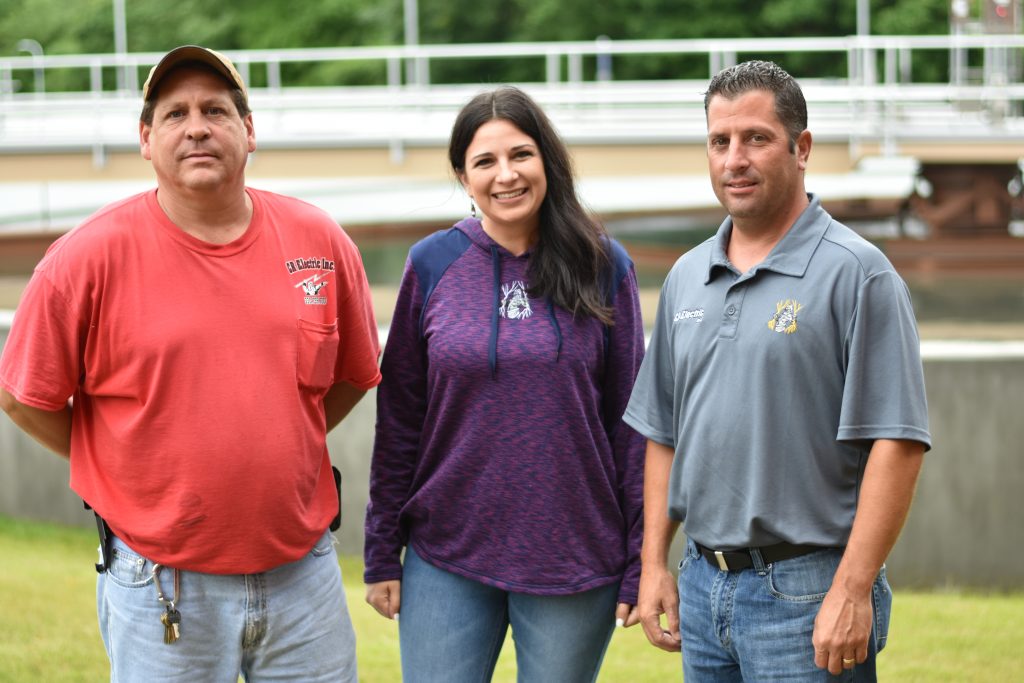 Those are just some of the numbers that have revolved around the Niles Wastewater Treatment Facility project for Girard-based CR Electric.

“I couldn’t do this without my team in the office – Tom McCleery, Nikki Copenhaver and John Robertson and also my outside team, Brad Darno, Mike Mientkewicz, Doug Ripple and all the apprentices that worked on this project,” said Jason Rubin, president, CR Electric.

The renovations to the plant were mandated by the Environmental Protection Agency to better treat water that is going into the Mahoning River.

“This has been a huge undertaking for our company,” said Tom McCleery, project manager, CR Electric. “I don’t know if we’ve had a project of this size before from the very beginning.”

Since December 2015, project foreman Brad Darno has been on-site overseeing it.

“It’s been a pretty impressive job,” he said. “The amount of technology we’ve put into this plant is helping them regulate things a lot better. Now, some of the sample testing is done here and some in the lab before going into the river.”

Two and a half years in, McCleery estimates that approximately 85 percent of the project is completed.

“We’ve built three new buildings, redid three aeration tanks and redid the administration building along with two other existing buildings,” he said. “Eighty percent of the project was put into conduit underground.”

“We have a SCADA program here where the facility is able to run the entire plant from one central location,” McCleery said. “It’s a huge upgrade for this facility.”

The SCADA system allows officials to analyze and receive crucial data about plant operations in real time of electrical utilities.

As with any project, this one wasn’t without complications. When AP O’Horo was excavating an area for three clarifiers, the plant’s proximity to the Mahoning River became an issue.

“Once [AP O’Horo] would dig down beyond the river, water would fill up the holes,” Darno said. “So, we were installing pumps for them to help keep holes dry.”

The future of the trade has also benefitted from the project, as CR Electric has engaged apprentices to contribute toward its completion under Darno’s supervision.

“There are many facets to our trade and this [project] had about every one of them,” he said. “From bending conduit; doing underground; pulling and terminating controls; terminating power and setting switch gear, there was a lot to learn on this job for an apprentice.”

Rubin also pointed out the invaluable experience for apprentices on a jobsite like this.

“As a contractor, it’s important to not only have experienced journeyman working together with the apprentices as a team but also to provide the tools and resources to properly train the apprentices so that one day they will be able to run a project like this,” he said.

Eric Walker, a fourth-year commercial electrical apprentice, reflected on one particular project task that challenged him.

“Probably wiring PLC’s,” he said. “You learn a lot and there’s a ton of wires that you have to go through and make sure are right. That was huge.”

As CR Electric looks to future ventures, McCleery notes this project will be used as a building block.

“It’s really bringing us to the next level,” he said. “Each project keeps getting bigger and bigger. What we’ve learned from project to project is benefitting the entire company all the way up.”

CR Electric is a member contractor of NECA-IBEW Electricians, an association of signatory Mahoning Valley electrical contractors and IBEW locals in Youngstown and Warren.