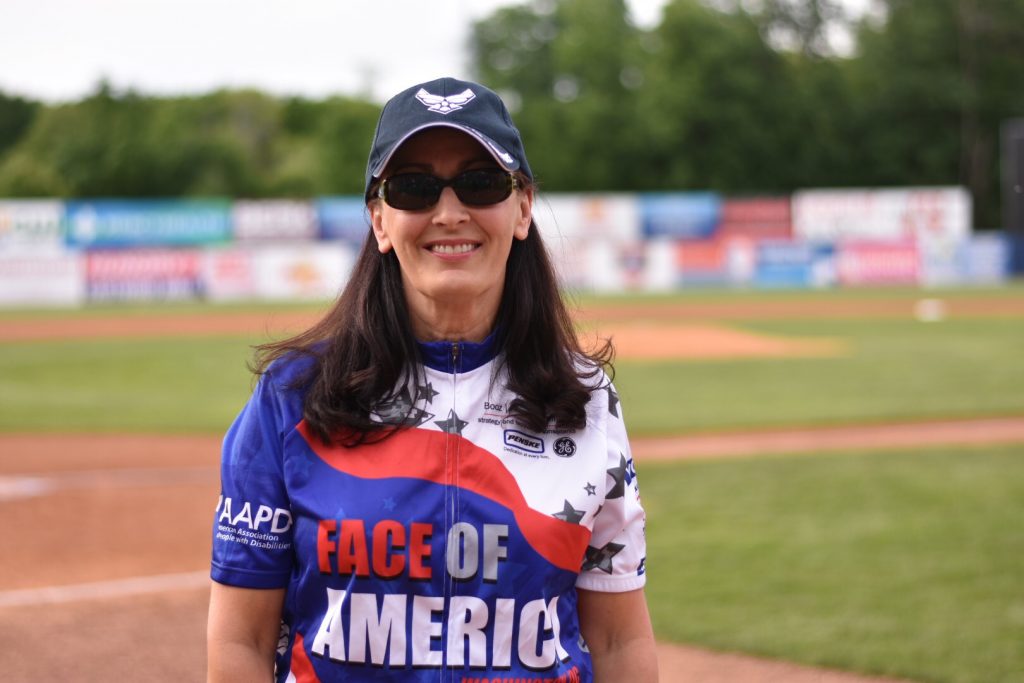 Bonnie Esposito, office manager for Mahoning Valley NECA, was one of four people who threw out a ceremonial first pitch during the Mahoning Valley Scrappers’ opening night festivities.

It was all smiles for Bonnie Esposito on Friday night.

“I’ve never done anything like this before, but it was an awesome experience,” Esposito said.

Esposito was selected to throw the ceremonial first pitch due to her support of U.S. Armed Forces.

“It was truly inspirational to ride alongside veterans who have given so much,” she said. “The bike ride was taxing, but my training had me mentally and physically prepared.”

To read about Esposito’s preparation for the bicycle ride, click here.

NECA-IBEW Electricians, an association of signatory Mahoning Valley electrical contractors and IBEW locals in Youngstown and Warren, are the official electricians of the Mahoning Valley Scrappers and co-sponsored the opening night fireworks display at Eastwood Field.

Member contractors were on hand to pass out branded flying discs as fans entered the stadium.

Member contractors also got in on the fun by passing out branded flying discs to fans as they entered the stadium. The electricians also sponsor Military Appreciation Nights throughout the season.

Honoring Veterans 1 Pitch at a Time

If you know of a veteran who would like to throw out a ceremonial first pitch at one of the Military Appreciation Night games, please contact Jim Houck at 330-554-5234.