It has been nearly two years since ground broke on the TJX Distribution Center in Lordstown that will bring more than 1,000 jobs to the Mahoning Valley and electrical contractor “Joe” Dickey Electric has been there from the beginning.

Looking at the 1.2 million square feet (and counting) warehouse from the road, it’s hard to believe that not very long ago it was nothing but dirt and trees.

Now, eight 4,000-amp distribution areas, miles of conduit and wire, and two 3.2 megawatt generators send power to more than 5,000 light fixtures, fire alarms and countless outlets that make up the electrical grid of the facility. 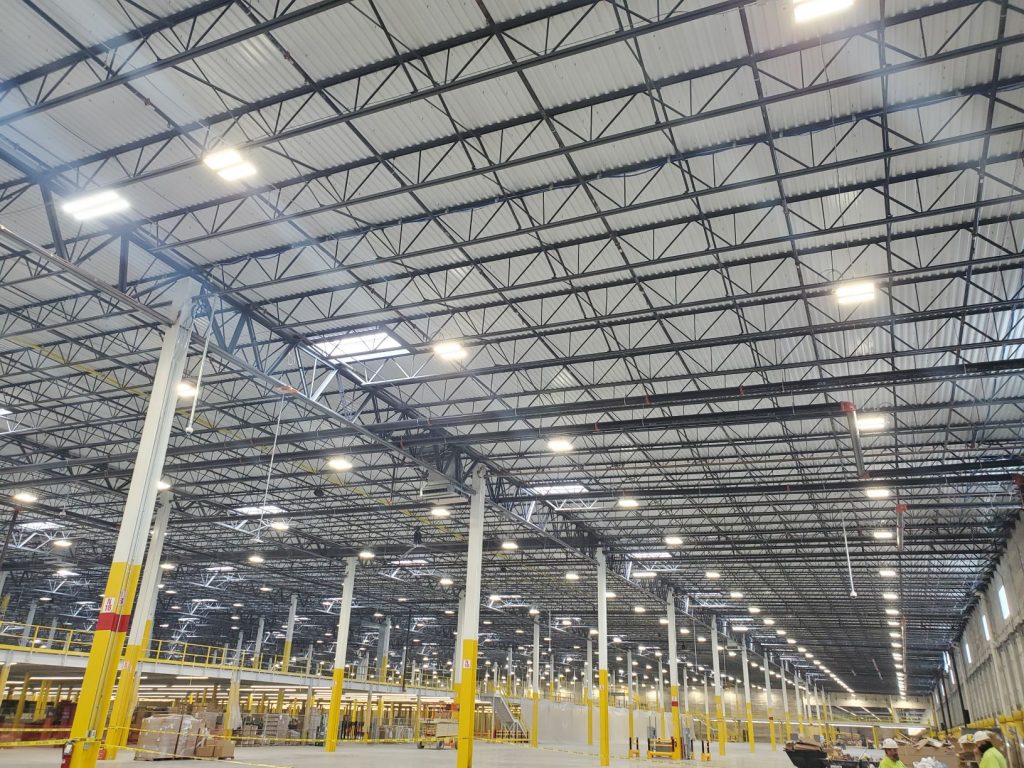 New hope for the Valley

Across the street sits the former General Motors Lordstown complex, now Lordstown Motors. Many of the electricians working on this project for Dickey Electric previously worked at GM Lordstown as outside electrical contractors. For them, new jobs in Lordstown after such a crushing loss are a symbol of new hope in the Mahoning Valley.

In addition to “Joe” Dickey Electric and IBEW Local 573, many of the other trades on site were also union and used local manpower.

“The TJX project was a great opportunity for ‘Joe’ Dickey Electric. It came pre-COVID and at a time when work in the Warren area was slow and became a significant part of our growth for 2020,” said Eric Carlson, president, Dickey Electric. “We and IBEW Local 573 were able to work hand-in-hand to secure the project in a true testament to our partnership. Because of this partnership, much needed manhours were created for the local electricians.” 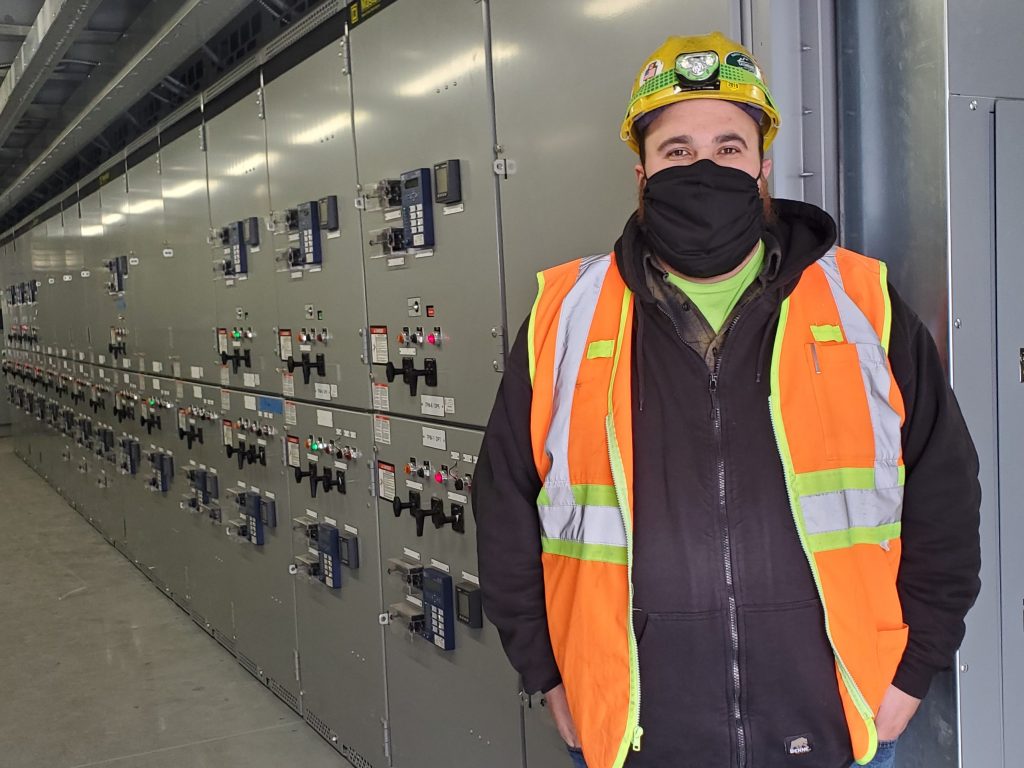 Steve Morse, general foreman for Dickey Electric, is a second-generation electrician who will always take pride in the workmanship his team exhibited on this high-profile project.

More than just a job

“My dad was a union electrician so it meant a lot to bring him on site and show him what I’m doing,” said Morse.

He also expressed his excitement to show his work to his three-year-old son.

“This will be something I can always drive by with my son and point out ‘Dad helped make that happen,’ so it’s personal to me.”

This project did not come without obstacles, as is to be expected in the era of COVID, but Dickey Electric took all necessary precautions and followed all protocols.

“We had to find new ways to keep everyone safe. We did temperature checks, wore masks and spread-out during breaks,” Morse said. “Even though COVID slowed down the rest of the world, we continued to work. Dickey Electric and all of its employees did everything they could to stay healthy. They knew an outbreak meant a shutdown and we could not have that. We did our best to stay healthy and we stayed on schedule.” 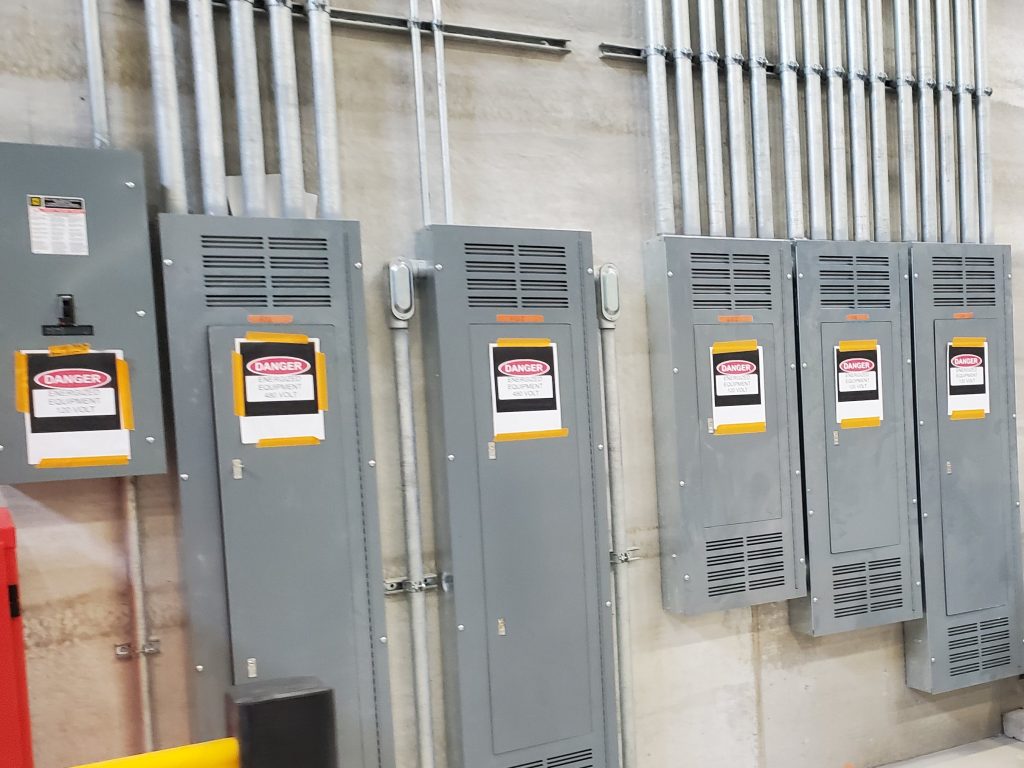 Miles and miles of conduit make up the power system installed by Dickey Electric on the new TJX Distribution Center in Lordstown.

He also added that this job could not have been completed without a great team of dedicated foremen and the skilled men and women of the IBEW.

“I’m so glad to see a great company like TJX coming to the Valley and employing our friends and neighbors,” Carlson said.

In the final months of this project, Dickey is adding in the last fixtures and tying up all loose wires as TJX begins to add staff. For information about jobs at the new TJX Distribution Center, click here.