While he’s constantly working with his hands, Keith Patton also enjoys a challenge.

The second-year apprentice with the Warren Electrical JATC is building on a foundation he established while in the United States Air Force from 2009 to 2017.

While serving, Patton was an electrical and hydraulics airplane mechanic, troubleshooting issues on C-5s and C-17s.

“Electricity, specifically commercial and industrial, has always intrigued me,” he said.

Patton is currently assigned to VEC, Inc. in Girard. He wants to work in large, high-voltage and amperage jobs when he completes the electrical apprentice program.

VEC is a member contractor of NECA-IBEW Electricians.

It’s also the team-approach and highly structured components to the larger jobs Patton is drawn toward as an electrician, which he also experienced in the service.

“I love there’s a standard of us going to school and learning basics. Building from there, the military had the same system, but faster,” he said. 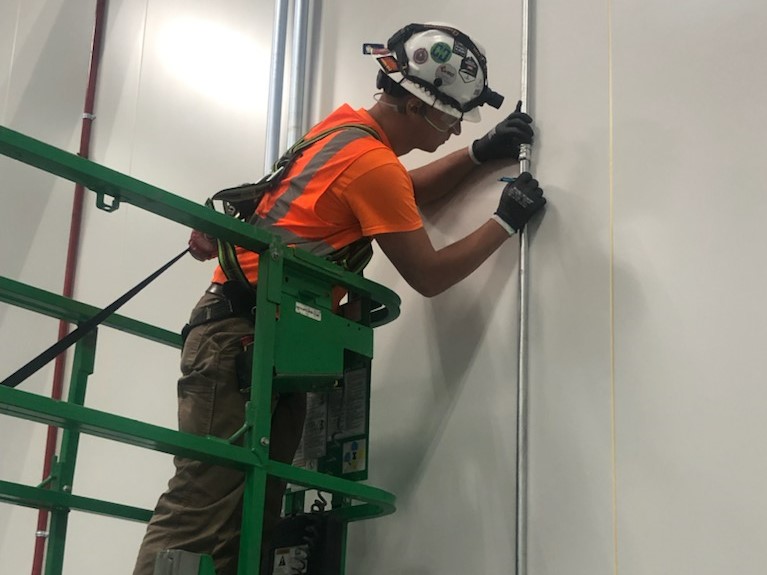 After working on aircraft in the United States Air Force, second-year apprentice Keith Patton is now learning about the electrical industry in-depth.

While the union apprenticeship program is five years, Patton squeezed his military education into four months, attending schooling for 40 to 60 hours each week.

There’s also the brotherhood aspect of the union that’s similar to the camaraderie he felt in the military, he said.

“When finding out someone is a veteran, there’s an instant bond. It’s the same with electricians.”

While he’s learning more about the electrical industry during the workday, Patton spends much of his free time pursuing his woodworking passion.

“I take orders for custom furniture and pieces, making them from my state-of-the-art woodshop at home.”

Patton’s dad taught him basics of the craft, but it was after buying his first house when he really fell in love with it.

So, he bought the tools and from there, “got the woodworking bug,” Patton said.

He’s often asked why he doesn’t do a simple creation.

His reply? “What’s the fun in that? I love the challenge.”

That challenge is also the reason he enjoys being an electrician.

“You learn how to do pipe runs and run wire,” he said.

Looking out for veterans not sure what to do after they exit the military, Patton recommends looking into the electrical industry.

“We need more veterans in the trades because of the work ethic we have. The attention to detail instilled in you while in the military is useful.”

There’s also a constant flow of work and “amazing benefits,” he added.

In his free time, Patton also enjoys boating on Berlin Lake and remodeling a house he recently purchased in Brookfield.