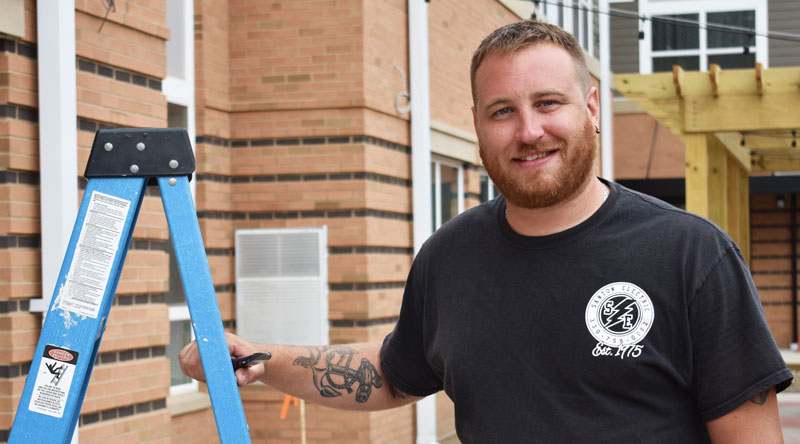 Now in his third year, Andrew Lemley is enjoying the challenges of commercial electrical work.

When he’s working on a commercial electrical project, Andrew Lemley has a simple mindset.

“I like doing something from the ground floor up.”

While employed at General Motors, Lemley was looking for a new career path. He applied and was accepted into the residential electrician apprenticeship at the Youngstown Area Electrical JATC.

After completing the three-year program, Lemley set his career goals even higher by looking to become a commercial electrician apprentice.

“I always had a feeling I wanted to get into the commercial side,” Lemley said. “As soon as I topped out of the residential side, I applied for commercial.”

Now in his third year, Lemley is enjoying the challenges of commercial electrical work.

“I like working with the big gear you have on the commercial side, along with the different types of wiring and different cabling you get to pull.”

Lemley credits his success to the skills he attained during his residential electrical apprenticeship.

“I couldn’t swing a hammer when I came in. I never did any construction. To come in and learn from the ground floor up, I think you get a better base in the residential program because the knowledge you gain there carries over to the commercial side.”

Throughout his apprenticeships, Lemley has also learned some very important lessons.

“Listen to someone who is older, wiser and knows what’s going on. Don’t touch anything you shouldn’t because it’s not going to feel great. Basically, if you follow directions, learn what you’re supposed to and learn how electricity works, you’re going to be able to take in that knowledge and look at a schematic and know how to troubleshoot.”

When recalling his favorite projects over the years, Lemley pointed out one with a historical impact – the newly renovated Youngstown Municipal Courthouse.

“It was cool seeing all the old nostalgia there,” he said. “The old service coming into the building and seeing all the different things you find when doing demolition on a building like that.”

When he’s not crafting his electrical skills, Lemley enjoys spending time with his fiancée, Lauren, and stepson Ethan. Lemley also makes an impact in the community as a youth hockey and soccer coach.

“When my fiancée’s son got involved in hockey, I decided to help coach a little,” he said. “That led into me being a head coach for a while. It’s been a fun ride.”

For those interested in joining the electrical trade, Lemley recommends following his apprenticeship path.

“Start in residential to get a good base foundation and learn that skill set there. It’ll carry over to commercial and you’ll be way more well-rounded.”