Mark Phillips said this one really hit home. It could have been any of us.

Phillips, President of IBEW Local 573 in Warren, was among a group representing the NECA-IBEW Electricians at Warren’s Central Fire Station to personally present checks totaling $2,500 to the family of Lt. Donald Beauchene.

Traditionally, the association of Mahoning Valley electrical contractors and IBEW union locals in Warren and Youngstown offer help to Veterans or safety forces families in need at Christmas.

Beauchane died from complications of COVID-19 in November. 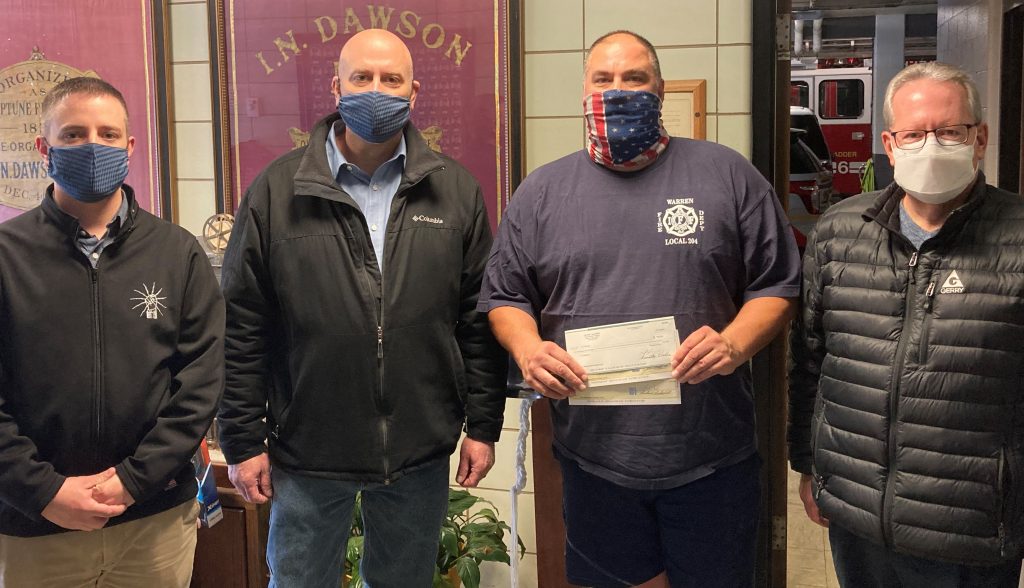 Representatives from NECA-IBEW Electricians presented a check to the Beauchene family in honor of Don Beauchene, who passed away from complications of COVID-19, leaving a wife and 10 children. From left to right, Mark Phillips (IBEW Local 573), Mike Nemkovich (IBEW Local 573), John Jerina, Warren Firefighter and IAFF #204 President, and Jim Burgham (IBEW Local 64).

“Don was a union brother, an accomplished firefighter, a community servant, a great dad, and he was right here in Warren,” Phillips said. “After learning what he and his wife have done for the little girl and her siblings who they adopted, it meant a lot for me personally and for our members to be able to help them out.”

Beauchene and his wife Michelle had six children between them when they married. They later adopted four more, including a little girl in need of a liver transplant and her siblings. Their story was told on Good Morning America in 2018.

“We felt it was a no-brainer that we should do something special for this family,” said Dan Santon of Santon Electric. “We’d heard about Don’s untimely passing and had already known the amazing story about him and his wife adopting the four children. We all wanted to do something to help.”

For information on how to help the Beauchene family, contact the Warren Central Fire Station at 330-841-2542.