Joe Dickey Electric Vice President Eric Carlson never underestimates the power of serving others. That’s why when the shop saw an opportunity to participate in Habitat for Humanity of Mahoning County’s new “Veteran’s Build” initiative, it was a no-brainer.

“We heard about the project and it just sounded like a good thing,” Carlson explained. “We have been a part of other Habitat housing projects in the past, but this project seemed like it would really help out one of our veterans who sacrificed so much protecting our freedoms. We have many veterans who work for us and in the electrical industry, and thought this was a good opportunity to be able to help a veteran.” 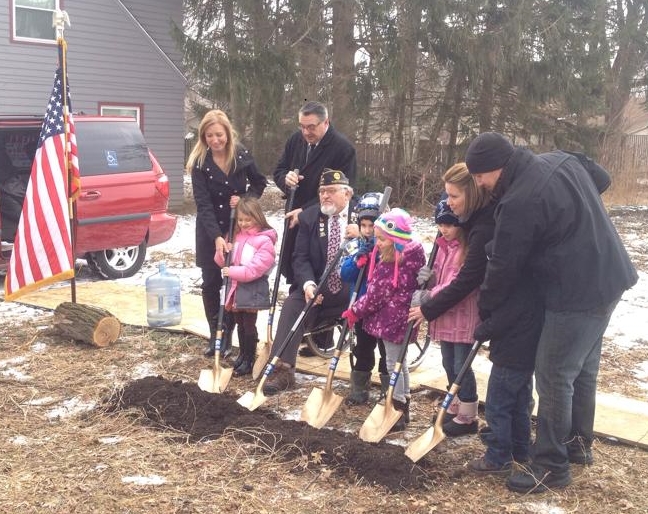 According to Justin Lewis, who is a project manager and sits on the Residential JATC Committee, Dickey will contribute an estimated $4,000 in materials and 200 man hours toward Habitat’s latest project, the building of a home for Marine Corps veteran James Skok and his family.

Dickey Electric, a member contractor of NECA-IBEW Electricians, will serve as the electrical contractor and manager for this project and will help coordinate the collection of material donations and lead the group of organizations volunteering labor. In addition to Dickey, work will be donated by JATC Apprentices and IBEW electricians. NECA-IBEW Electricians has pledged financial support to help cover the costs for materials for the project.

The house will be built at 3889 New Road in Austintown, Habitat’s first Veteran’s Build project there. It will be the first Habitat house in Austintown and the first one built specifically for a veteran.

Skok served in the Marines from 1992 to 2010 and injured his back in the line of duty. During his military career he served in the Iraq war.

Skok is not only a veteran, but also has a disability. He has a metal plate in his spine and is 60 percent disabled. The house will be a four bedroom, two bathroom, ranch home that has a 1.5 car attached garage and handicap accessibility. The house will be Energy Star certified and meet the standards set under the Americans with Disabilities Act. Land for the ranch house was acquired through the Mahoning County Land Bank.

Skok and his wife, Laury, will reside in the home with three of their children. The family will put in the mandatory 400 hours of work on the house, complete 23 classes and save for a down payment as part of the project.

Habitat for Humanity of Mahoning County broke ground March 1 on the new home and a wall raising will be held in early April. The house should be complete by the end of July. The electrical portion of the project is scheduled to start near the end of April with Dickey’s electricians aiming to do their work during weekends and after their regular work shifts.