Braeden Allen is not only earning money while he learns, but he’s doing it all while working alongside people he’s known forever.

His father is Ryan Allen, job superintendent for Boot Electric.

A construction wireman, the junior Allen has been learning the ropes “while friends have been at class in college,” not applying lessons to real-life, he said.

While Braeden followed his father’s footsteps from the start, Ryan Allen was attending college years ago when he ultimately decided it wasn’t for him.

He was studying education.

Luckily, he can still scratch his teaching itch on-the-job; and now he gets to educate his own son, Allen said.

Earlier in May, Boot Electric began installing underground pipes for electric and communications lines at a new Dairy Queen on Market Street in Boardman.

Fastening the pipes together was Braeden Allen and Jaime Henderson, a journeyman electrician of 20 years. 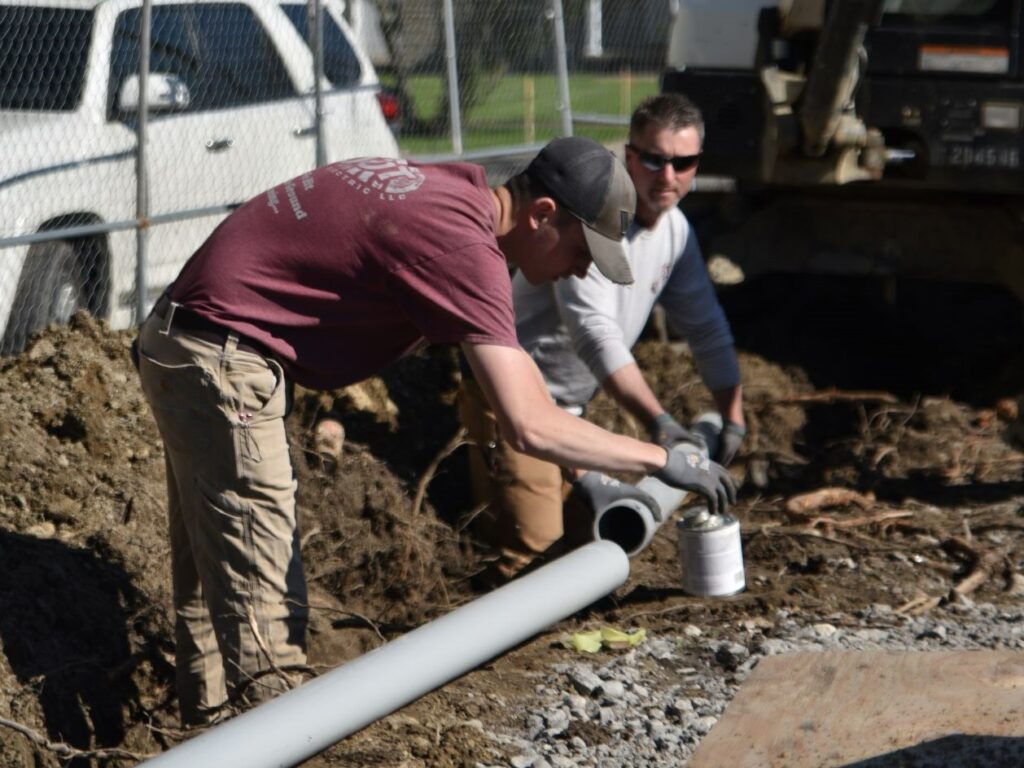 Braeden Allen, left, glues a pipe together while Jaime Henderson watches. Allen grew up in the electrical industry, and now works with Henderson at Boot Electric.

“I’ve been around Jaime and my dad” forever, Braeden said, “so I’ve seen them at work.”

That was a weighing factor in joining the electrical industry, he said.

For Henderson, having local jobs “sure beats the trek and wasted time” of commuting hours each way to out-of-town sites.

He decided to be an electrician because he enjoys the work, which is also in high demand.

“It’s a field that will always be there. That was a main point for me” when deciding, Henderson said.

There’s also a sense of pride watching his home community grow, knowing he and Boot Electric had a part in that.

“It’s good to see that growth, compared to what we’ve seen in the past” around the Mahoning Valley, he said.