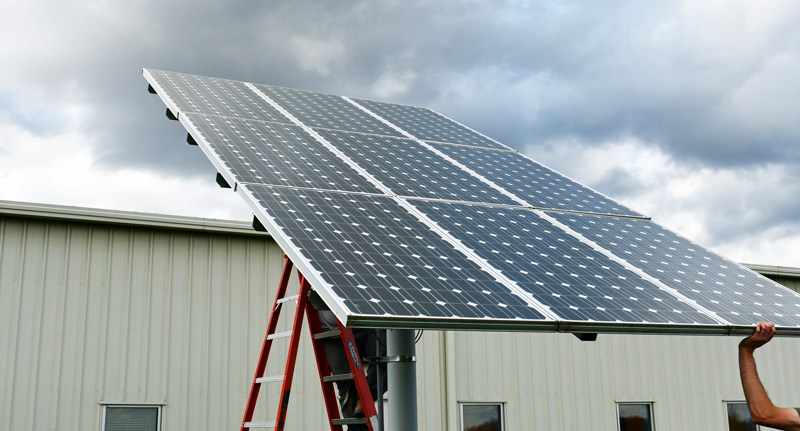 Fifth-year apprentices at the Warren Electrical JATC work on adjusting a solar panel outside the facility earlier this week.

As green energy continues to evolve, NECA-IBEW Electricians member contractors are preparing for renewable energy sources to be used more in construction projects.

“Green energy has its niche market,” said Steve Fife, journeyman electrician at “Joe” Dickey Electric and fifth-year apprentice instructor. “There’s a lot of people interested in it. Not only does it help the world globally with reducing CO2 emissions, but it’s starting to take off because people are starting to understand it a little bit better.”

Locally, member contractors have executed multiple green energy projects, including installing 2,000 solar panels on the roof of the Liberty Walmart and a massive solar array at the GM Lordstown plant.

“It’s been mostly commercial and industrial here,” Fife said. “We’ve also done some projects for the Army Corps of Engineers at some of their state parks.”

At the Warren Electrical JATC, apprentices get an in-depth look at solar energy as part of their classroom curriculum.

“We take the students outside where they can install panels and hook them up,” Fife said. “They also learn about maintaining the equipment, including the inverters. Cleaning the panels is one of the big things that needs to be done as well.”

Wind energy is also touched on thanks to a wind turbine training tower.

“A lot of the hookups are the same electrically for the wind turbines,” Fife said. “We have safety training out there too. Apprentices learn how to climb and work hands-free. Part of the training also includes rescue training.”

And, both Fife and the fifth-year apprentices feel this hands-on training will lead to a bright future.

“Between wind and solar energy, it’s renewable and ever-expanding,” said Josh Shrevers, commercial electrician apprentice. “Once I top out, I’ll have many avenues to choose from, including solar and wind.”

“It expands the apprentices’ ability to go out and do different types of work,” Fife said. “They can gain a lot of knowledge in the classroom. When they top out and become journeymen, they have a lot of knowledge on green energy that they can do on their own.”

“We know it’s big in the southern states and in the southwest. A lot of states push green energy for new or existing construction. I really hope to see it take off here.”