If you’ve ever heard a Motel 6 commercial you can probably quote spokesperson Tom Bodett’s last line: “We’ll leave the light on for you.” But unless the budget hotel chain is speaking figuratively, those lights better be LED. 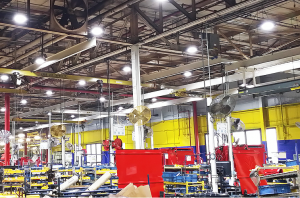 Retrofitting to LED lighting can save on energy costs while providing higher-quality lighting. (photo courtesy of Titan LED)

Commercial building owners and managers are starting to recognize that energy efficiency retrofits to light-emitting diode (LED) have potential cost and energy-saving benefits. Some industry observers say only 5 percent of the market has retrofitted to LEDs, so we’re still on the early side of this trend.

LED retrofitting means replacing existing lighting with a new and better lighting technology, preferably to increase the energy efficiency and the quality of light in the facility. Retrofitting is a term often used when converting older, outdated lighting technologies such as fluorescent, CFL and HID (metal halide) to a newer energy-efficient technology, like an LED system.

Here are 4 reasons to consider an LED retrofit for your commercial building:

1) Your facility can experience up to 50-90 percent in energy savings. Unlike incandescent bulbs, which release 90 percent of their energy as heat, LEDs use energy far more efficiently with little wasted heat.

According to the U.S. Department of Energy, in 2012, about 49 million LEDs were installed in the U.S. – saving about $675 million in annual energy costs. Switching entirely to LED lights over the next two decades could save the United States $250 billion in energy costs, reduce electricity consumption for lighting by nearly 50 percent and avoid 1,800 million metric tons of carbon emissions.

2) LED lights have longer lamp life, which saves on replacement and maintenance costs. Good-quality LED bulbs can have a useful life of 25,000 hours or more, meaning they can last more than 25 times longer than traditional light bulbs. That is a life of more than three years if run 24 hours a day, seven days a week.

3) LED lighting provides improved quality (70 percent more) of light than other types of non-LED lighting. The beam angle of the LED replacement bulb is 110 degrees. This means that all of the light generated by the LED bulb is focused in the 110 degree area.

The T8 bulb, on the other hand, has a beam angle of 360 degrees, which means the majority of the light is going out the sides and top of the bulb, which does not benefit the intended target.

4) Eligibility for utility incentives, tax rebates and local incentives. Beyond the direct savings achieved by buying less power, there are many financial incentives offered in the form of government tax deductions and power utility rebates (where available and subject to qualifications that vary) to encourage adopting energy-efficient practices.

Deciding to retrofit to LED lighting is an investment for sure, but one that could ultimately pay for itself in short order because of the benefits highlighted above and others.

Contact a NECA-IBEW Electricians member contractor with your questions or for a proposal for retrofitting to LED.

If anything, you’d be able to take Mr. Bodett’s advice and leave the lights on without fear of them burning out too quickly or running up your electric bill.