Misconceptions about skilled trades have plagued the industry for years.

Young people have been encouraged to attend college post high school graduation and continue to work long careers at a desk until retirement, without allowing opportunities for those who enjoy working with their hands or have natural mechanical talents to grow.

Warren JATC instructor Mike Reed says that many kids who show interest in working in the electrical trade don’t think about the reality of the skilled trades.

“They think that we don’t make money,” he said.

But with careers in the building trades offering full benefits packages, flexible hours, and great pay, this misconception couldn’t be further from the truth.

Michon Peterson, a fifth-year apprentice, says “A lot of people nowadays think college is the only way [to go].”

There are other paths besides college

Peterson thinks that attending events like the Skilled Trades Expo in Canfield helps younger students see that there are other jobs out there, and college is not the only path toward a rewarding career.

When he began his schooling to become an apprentice, he “thought [he] was going to be sitting down at an electric panel.”

Peterson was unaware that electricians “did all the steps, like putting a pipe in” for the electrical wires.

Having furthered his education in the field, he now knows how untrue the misconceptions he had as a kid were.

Third-year inside wireman apprentice Katherine Gintert says that when she was in high school, he thought working in the trades was for kids who “couldn’t do math.”

“My parents and I thought that if you were getting good grades in high school, it meant you had to go to college,” she said.

However, as someone who always liked working with her hands, Gintert realized there was a place for her in the building trades.

“Working in the trades is not for the kids who can’t do math. It is not always back-breaking labor. We have the tools to make it easier on your body. I am 5 foot 3 inches, and I can do anything these guys can do by just getting a bigger tool,” she said. 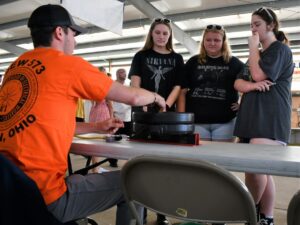 An electrical apprentice shows students an electrical circuit to show how electricians work with their hands on a number of projects.

Parents’ and students’ mindsets about career options are changing

Guidance counselor at Austintown Middle School, John Hudson, said he has seen his students and their parents become more interested in skilled trades over the last five years.

Hudson believes that the way students and their parents think about career options is changing and that it is important to consider all aspects of careers for kids.

“There are different pathways for everyone. We try to give them access to all of those opportunities,” he said.

Despite renewed interest in students, some parents still have reservations about their kids working in the trades and not attending college.

Still some work to do to change perceptions

“Sometimes people may feel that working in the trades is beneath them. Not understanding that these jobs are just as important as anything else, and if you find something that you love, it makes all the difference,” Hudson said.

Arianna Mozzillo, an 8th grader at Austintown Middle School, said she enjoyed seeing the painting and welding stations at the Skilled Trades Expo. Her father is a tradesman, so she has known about careers in the trades her whole life.

She thinks that exposing her friends at school who don’t know as much about the trades as she does is a good thing.

“Being here definitely changed how I perceive what people who work in trades do,” Mozzillo said.

Going on to explain that by watching the demonstrations of the various trades, the workers can make their projects look easy. However, when she tried it by herself, she realized it takes some skill.

Austintown Middle Schoolers pose with their teachers and counselors after a day of exploring exhibits at the 2022 Skilled Trades Expo.

School districts want to hear from the building trades

Ed Emerick, training director with IBEW Local 64 in Youngstown, says that while the students attending the Expo have become more interested in the displays over the years, what has really changed is the attention from the local school districts who now want representatives to come present to students in classrooms.

“We had no contact with local schools, and now we do. Instead of us calling them, they’re now calling us. This is a big change,” he said.

He says he has noticed the larger school systems in the area, such as Austintown Local Schools, are bringing more students each year to the Skilled Trades Expo.

Emerick feels that as shop classes are brought back into schools, students can discover what their natural mechanical talents are once more.

“Almost all of these trades have an associate degree that can be achieved along with the trade itself, and that gives them a leg up if the student wants to move on to business or engineering,” Emerick said.

There are plenty of opportunities for students and their families to explore working in the building trades, and the Skilled Trades Expo is certainly one of them.