Member-contractor, VEC has been awarded a National Electrical Contractors Association Project Excellence Award for its work on the Ultium Cells battery plant in Lordstown, Ohio in 2021.

Mike Reiser, VEC Vice President for the Industrial Division, says the team, was “responsible for the switch yard, which is a 138,000-power volt, as well as the substation, site lighting, inside data center and the low voltage infrastructure for the entire facility.”

It was a shock, but an honor when VEC found out they had been chosen for the project, a nontraditional one for the company, Reiser said. 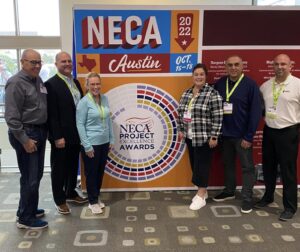 “We have never really navigated with a South Korean entity and the way that they execute business is different than the way we do in the states,” Reiser said.

The timeline and schedule that the project operated on sometimes required the crew to work 12 hours a day for seven consecutive days.

The manager for the project, Nick Barbush, said the heart of the job was the men and women on the crew.

“The pride and craftsmanship shown on the project speaks volumes. It is very seldom that the field team is recognized for their efforts and the sacrifices they make,” he said.

When working with a foreign company that is operating in a completely different time zone, communication can be challenging.

This led to some confusion during the project, but it was nothing that the team couldn’t handle to get the job done. 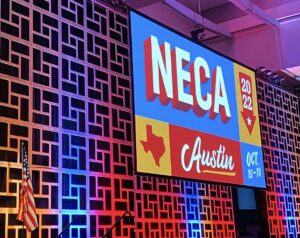 The NECA Project Excellence Awards were held in Austin, Texas at the NECA Convention the weekend of October 14th.

Throughout the process, the team worked on a fast-paced, at times unrealistic schedule with tight deadlines. Despite this, they completed the project on time and with the exceptional, high-quality work VEC is known for.

Reiser says this project, and the NECA Excellence Award will undoubtedly give the company a leg up within the future projects they will be pursuing.

Ultimately, the team that worked on the project throughout the year gave their all.

“I tell everybody, all the credit is due to the team,” Project Superintendent, Dirk DeCesare said.