The 20-year-old was recently awarded the NECA-IBEW Electricians’ LMCC Scholarship through the YSU Foundation.

“I’m grateful for the scholarship and for the union,” Gates said.

To be awarded to the scholarship, applicants must live in Mahoning, Trumbull or Columbiana counties and have at least a 2.5 GPA while attending YSU and pursuing degrees that benefit the electrical industry. Students must also have an affiliation with IBEW Local 64 or a signatory electrical contractor in the Mahoning Valley. 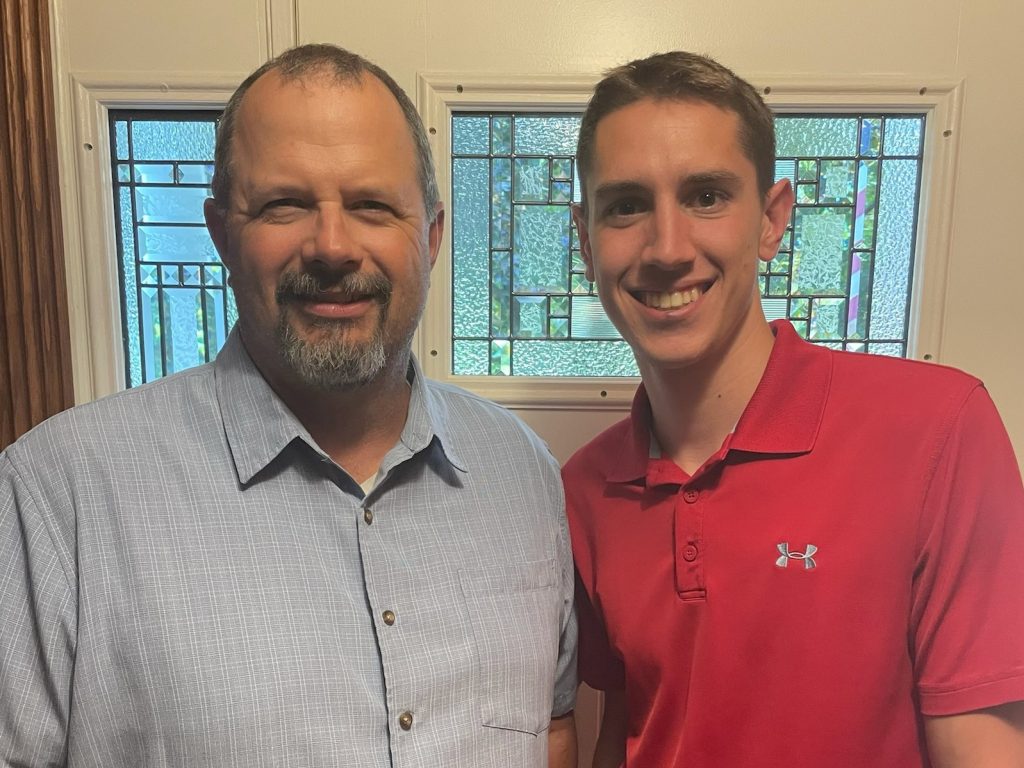 Jeff Watts, left, and stepson Ryan Gates are both in the electrical field. Gates, a student at Youngstown State University, was recently awarded a $1,000 Labor Management Cooperation Committee scholarship funded by the National Electrical Contractors Association-International Brotherhood of Electrical Workers (NECA-IBEW). Watts is a journeyman electrician with IBEW Local 64, and Gates is studying electrical and computer engineering.

Gates’ stepfather, Jeff Watts, is a journeyman electrician with IBEW Local 64. He’s been with the union for more than 30 years.

Gates is entering his third year at YSU and maintains a 4.0 GPA. Growing up with an interest in electronics, it was natural for Gates to major in electrical and computer engineering, he said. Gates has always enjoyed math, and said Watts influenced him a bit, too.

After graduation, Gates hopes to stay at IES Systems in Canfield, where he is currently interning, designing electrical components for projects.

“I wanted to get into a program where I could create electrical pieces,” Gates said.

The electrical industry is ever-changing and has many different career paths, both Gates and Watts said. When they aren’t bonding over the Cleveland Indians, the duo will talk about their respective roles in the electrical field.

Watching Gates pursue an electrical-related career makes Watts proud. His grandfather and great-grandfather established their own electric company after coming from Italy. Watts had family members, even his father, who were in the electrical business in various capacities.

To see Gates carry on the tradition, Watts is happy that his stepson is pursuing a career with higher demand and opportunity.

“I’m grateful for the electrical industry. It provided very well for me for 30-some years,” Watts said. “I’m glad it’s going to provide well for him in adulthood.”

Work environments have also improved as technology advances have been made, Watts said.

Both Gates and Watts are appreciative of NECA-IBEW, which supports education, whether at the beginning stages, as Gates is, or career-long as Watts has experienced.

As the industry evolves, NECA-IBEW has supported ongoing educational opportunities like this one through the YSU Foundation to help its union members and electrical contractors also grow.

Apply for next year’s NECA-IBEW Scholarship

Applications for next year’s scholarship will be taken through May 1, 2022. Visit ysufoundation.org for details.