Standing proudly to greet the thousands of fairgoers are a flock of bright, proud roosters.

Each painted differently, they are part of a fundraising program from both the Canfield Fair Board and Canfield Fair Foundation, both of which Dickey Electric CEO and co-owner Dave Dickey is a past president.

The Canfield Fair Foundation has built a new event center, which will be used for the junior fair each year.

For this week’s 175th Canfield Fair, 21 fiberglass roosters were commissioned by 21 different artists after they were sponsored for $3,500 apiece. Each masterpiece has the artist’s name, along with title of the work and sponsor, all displayed on the front. 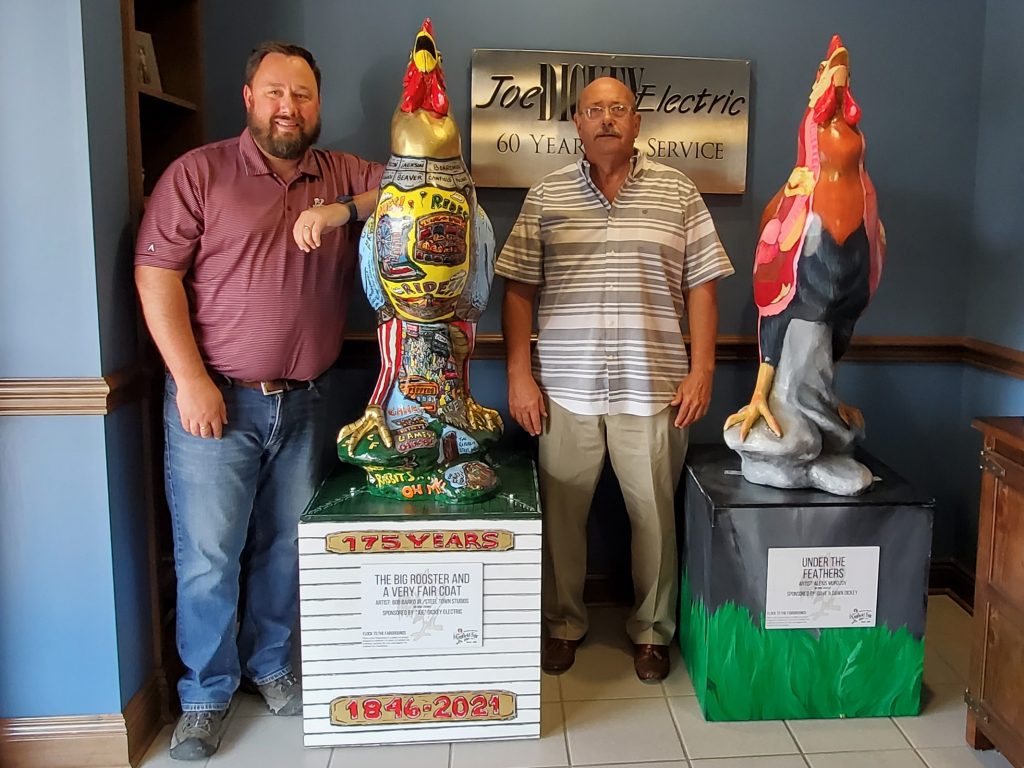 Eric Carlson, left, president and co-owner of “Joe” Dickey Electric, stands with past-president Dave Dickey and roosters that will be auctioned off later this year benefitting the Canfield Fair Foundation. The roosters can be seen under the grandstand at the Canfield Fair this week.

The roosters are about 4 feet tall and are mounted to 2-feet-tall bases.

They can be found under the grandstand this week, and if they move, they will all flock together on the fairgrounds.

Dickey Electric’s sponsorship of two, along with DataCom’s rooster, are part of a well-established custom of supporting the community, initiated and engrained by Dickey’s father, Joe.

Both Dickey Electric and DataCom, a telecommunications subdivision, are members of NECA-IBEW Electricians.

Dickey added that the sentiment from the locally owned business also meshes with what the Canfield Fair is all about: tradition.

Twenty sponsors chose artists that were vetted through a review process, Dickey said, which included the artists submitting renderings of their rooster ideas.

As each sponsor handed in their money, they were able to choose their artist on a first-come, first-serve-type basis.

For Barko, who owns SteelTown Studios, the Canfield Fair is ingrained in his personal history, so it was a no-brainer when he was approached to paint a rooster. 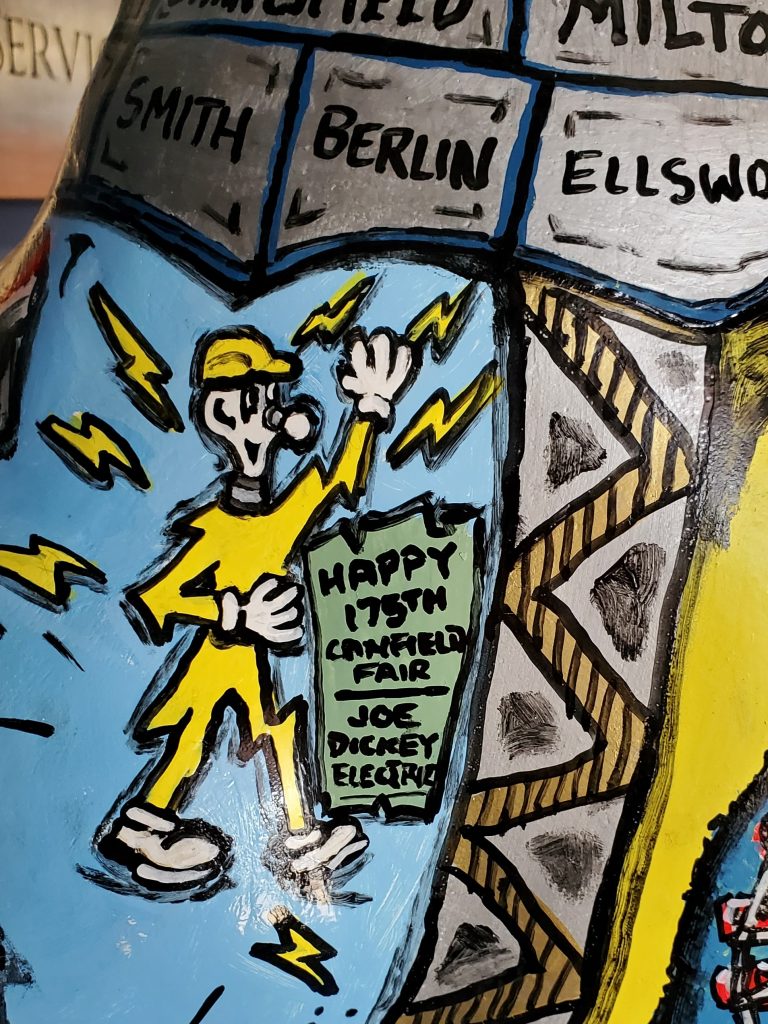 “It’s been part of my being all my life, as far back as I can remember,” Barko said of the Fair. “When this came along, it made total sense. How could I not” participate, Barko said.

He has only missed the Canfield Fair twice: once in 2012 when he was in Afghanistan for military duty, and then last year when it was canceled due to COVID-19.

It took Barko about two months to complete his rooster.

Throughout the process, artists had communication with their sponsors, Barko said.

Something to crow about

The roosters will be auctioned in November, Dickey said, with proceeds going toward the foundation’s “immense” project of the community center.

The five-phase project has a price tag of $7.5 million, with about $2.5 million already raised. “We’re concentrating on the classrooms” now that the building is up, Dickey said. 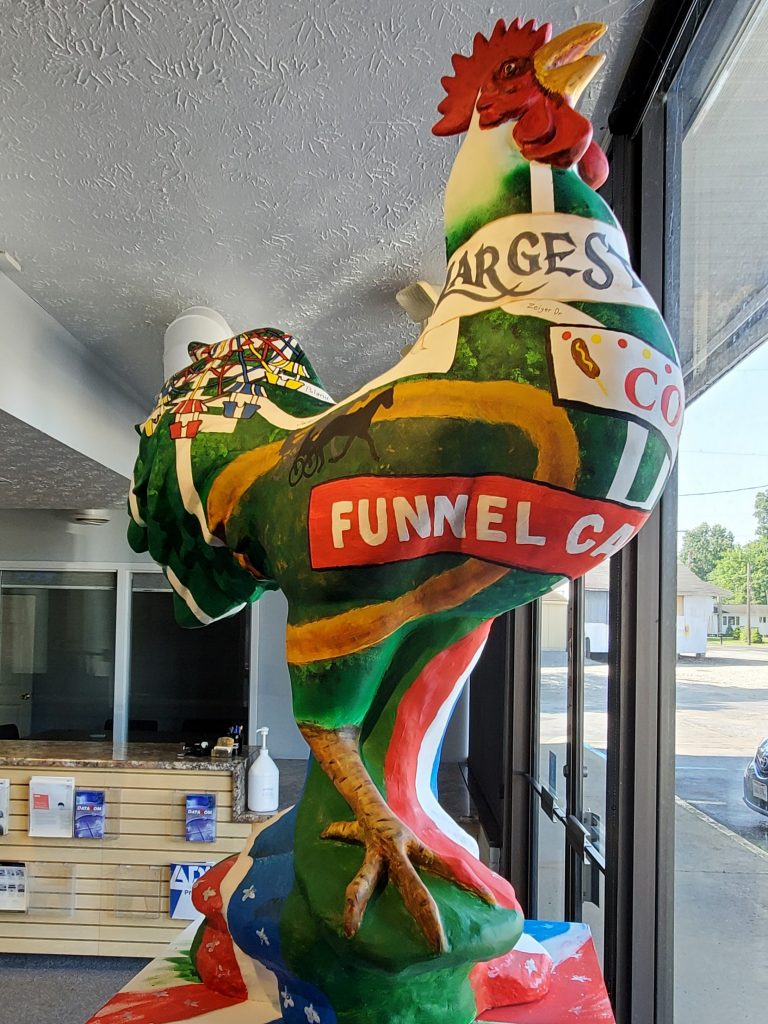 In the window of DataCom in North Lima has been a proud rooster, boasting about some fan favorite concession foods.

The fundraising opportunity gave the artists a creative outlet, who now can showcase their work.