The Youngstown State University student NECA chapter earned national acclaim for the second year in a row through its participation in a sustainable energy competition.

This October it won the poster contest component of the Green Energy Challenge, a national competition involving engineering technology programs from around the country. This year it bested Penn State University and Purdue University in the finals. 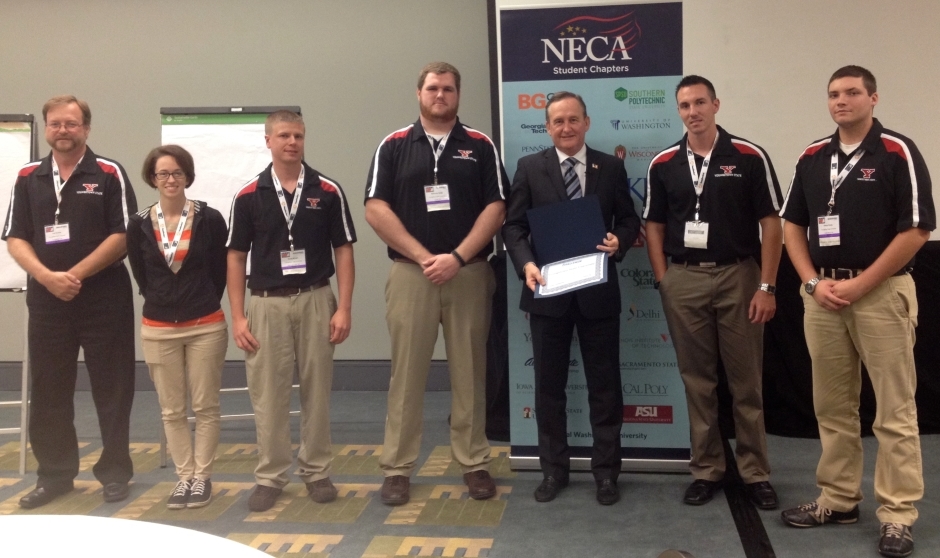 “We’ve certainly enjoyed our share of success at this national competition, and it’s reflective of the classroom instruction and field work perspective we receive from the university and industry partners that work with us,” said Ethan Parks, a member of YSU’s student NECA team and estimator at Dickey Electric.

The poster competition involves creating a visual depiction of the team’s proposal for the annual Green Energy Challenge, which this year solicited students’ ideas for improving the energy efficiency of an existing parking structure on their respective campuses. The YSU team developed a program for the M-1 parking deck on Wick Ave., and the university is looking at implementing some of the team’s ideas upon its next renovation project.

Posters were judged at the National NECA Convention in Washington, D.C., in October by members of the ELECTRI International Council. The YSU team was represented at the convention by David Wright, Nick Gealy, Kaylin Celedonia, Bob Page and Ethan Parks. Its advisor is Dr. Ted Bosela.

The 2012 YSU team won the proposal component of the Green Energy Challenge over Georgia Institute of Technology, Iowa State University and the University of Washington.