[As printed in the Business Journal Growth Report 2022 …]

Heading into 2021, local electrical contractors and union electricians were hopeful the year would lead to steady, solid work.

Driven by one particular project, the NECA-IBEW electricians experienced “the largest number of man-hours that anyone can remember,” says Tom Lipka, executive director, Mahoning Valley NECA Chapter, referring to the Ultium Cells battery plant in Lordstown. An IBEW union official says as many as 450 electricians are on-site working. 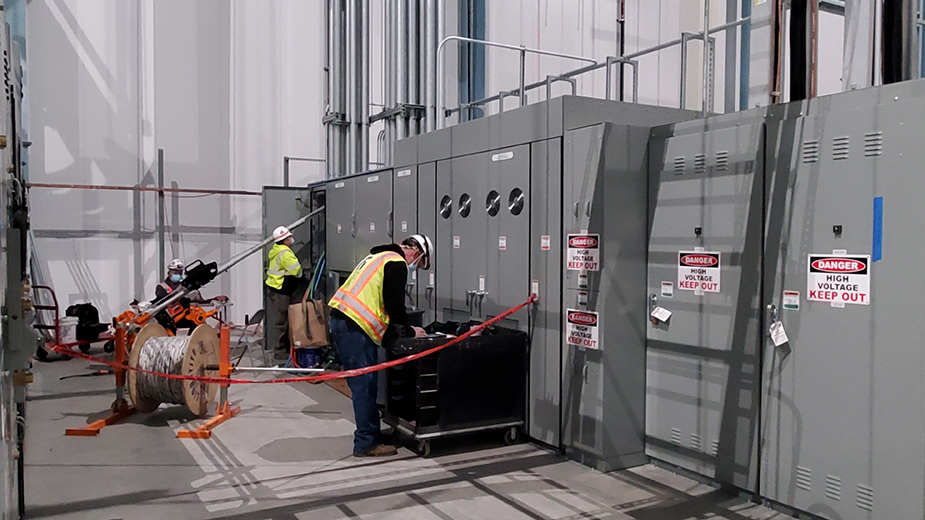 The steady work from the battery plant and neighboring Lordstown Motors will lead to even more hours, says Mike Nemkovich, business manager for IBEW Local 573.

Together, both projects “will spur spinoff work,” creating a demand for local building trades manpower for the next couple of years. “We’re looking for quality, experienced journeymen to join our ranks and help us literally build the future of the region’s economy,” Nemkovich says.

NECA-IBEW Electricians is composed of IBEW Local 64 of Youngstown, IBEW Local 573 of Warren and signatory electrical contractors in Trumbull, Mahoning and Columbiana counties.

• A jolt in man-hours. While work remained consistent in Mahoning County, man-hours worked in Trumbull County soared 150%. Collectively, the two union locals worked more than one million man-hours in 2021, the most it’s experienced in years.

• More large projects to come. In the pipeline for Trumbull County, Nemkovich says, are the Meijer grocery store in Niles, a hospital at Kent State Trumbull in Champion, a tower addition to the Trumbull Hospital in Warren, construction of Trumbull Energy and a nearby battery recycling plant to accompany Ultium.

• Community support. Several donations in 2021 helped local community or charitable causes. As examples, the association adopted four families in need from Potential Development during the holidays. Local 64 volunteered with the United Way of Youngstown and the Mahoning Valley. Local 573 donated 16 bikes to the Big Brothers Big Sisters program. “Joe” Dickey Electric completed work at the Rescue Mission in Youngstown at-cost, and Santon Electric donated time and material to the “Handshake of the Century” statue in Youngstown.

“We build relationships in each township and city. We hope they know that when they need electrical work, from residential to industrial, they can depend on us to get that work done safely, correctly and efficiently,” Satterlee says.