Nick Berni is valued by everyone, whether it’s his customers, coworkers, his employers at Gulu Electric, or family.

Berni started his journey with Gulu Electric as an apprentice. When he topped out, he was a residential journeyman, Gulu said.

He’s the employee who would volunteer to take on the jobs a little farther from home, whether in Proctorville, Ohio or Erie, Pa.

As his three boys grew, Berni needed and wanted to be home more. He decided he’d made a change, opting for a position with a local park service. 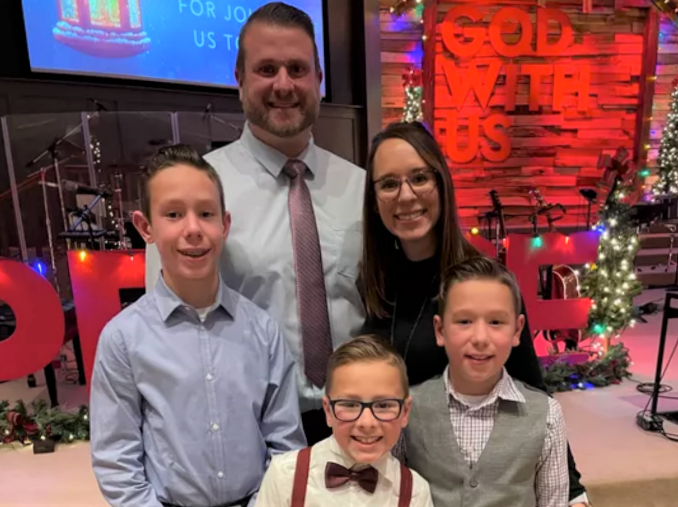 Journeyman electrician Nick Berni and wife Pam take a picture with their three boys. Upon being diagnosed with cancer the Bernis are finding support through Gulu Electric where Nick works, along with church and family.

That’s when Gulu pulled him aside and said there was an offer for him, staying with the company and close to home.

“He’s the one person we felt we can’t lose,” she said.

Now a project manager for Gulu Electric, Berni has been a staple with the company, which is a work family.

In December 2021, Berni had said he had stomach aches. In January 2022, he went to a doctor, and an ulcer was found by the small intestine.

On a liquid diet for about a month, Gulu said Berni had to miss out on the treats usually in the office, as he’s the one who loves to eat a good snack.

During a follow up appointment, no change was detected in the ulcer, so a doctor at University Hospital was recommended.

Around the end of February, Berni passed out at home. His wife Pam took him to the ER, where he was treated and released.

The next day, he passed out again, and tests showed Berni was bleeding internally.

From there, Berni was taken to the University Hospital in Ravenna, then Cleveland where an emergency surgery was performed and cancer was found.

A mass was removed, along with Berni’s gall bladder and pancreas.

Now that he’s home, Berni’s wife Pam has been taking care of him.

While Berni prepares for his battle, the team at Gulu is pitching in, taking it “one day at a time, just like Nick is,” Gulu said.

Also helping is the family’s church, which has helped plan and prepare meals, she said.

A GoFundMe page has been set up to help offset costs for the Berni family.

Gift cards are also being accepted. For anyone interested in helping, they can be sent to: Nick Berni C/O Gulu Electric, 1295 Crescent Street, Youngstown, Ohio 44502.