Beating the heat one day and braving brisk temperatures the next, thousands of students from local high schools attended the Mahoning Valley Skilled Trades Expo in Canfield.

Held at the Canfield Fairgrounds Sept. 22-23, the expo was an opportunity for middle school and high school students to start the conversation about joining a trade after graduation.

Members of four locals, including IBEW Local 573 in Warren, IBEW Local 64 in Youngstown, IBEW Local 246 in Steubenville and IBEW Local 712 in Beaver, Penn., talked with students about the industry.

“We’re demonstrating what we do in our trade to as many students as possible,” said Ed Emerick, training director, Youngstown Area Electrical JATC.

Katie Gintert, a second-year apprentice with IBEW Local 573 in Warren, talks with students during the Mahoning Valley Skilled Trades Expo in Canfield. Throughout the event’s two days, Gintert said she was able to talk with girls who were interested in becoming an electrician.

Setting this year apart from the expo’s first, single-day event in 2019 is the time frame.

Organizers decided to make it a two-day event, allowing for more interaction with students and teachers after more than 4,000 students attended the inaugural expo.

“We were able to get a lot more kids with hands-on exposure of the industry,” Emerick said.

Leading the demonstrations were local apprentices, including Katie Gintert, of Local 573 in Warren.

For Gintert, a second-year apprentice, showing teens what she does was fun.

“There were a few girls who had an interest, and I feel like I really connected with them,” Gintert said.

“It was cool,” she said. “It was interesting to find out (electricity) is based on a lot of math, which I’m good at,” Reagan said.

She’s giving trades some thought. Her favorite part of the expo was testing out her strength, bending the pipe, she said. 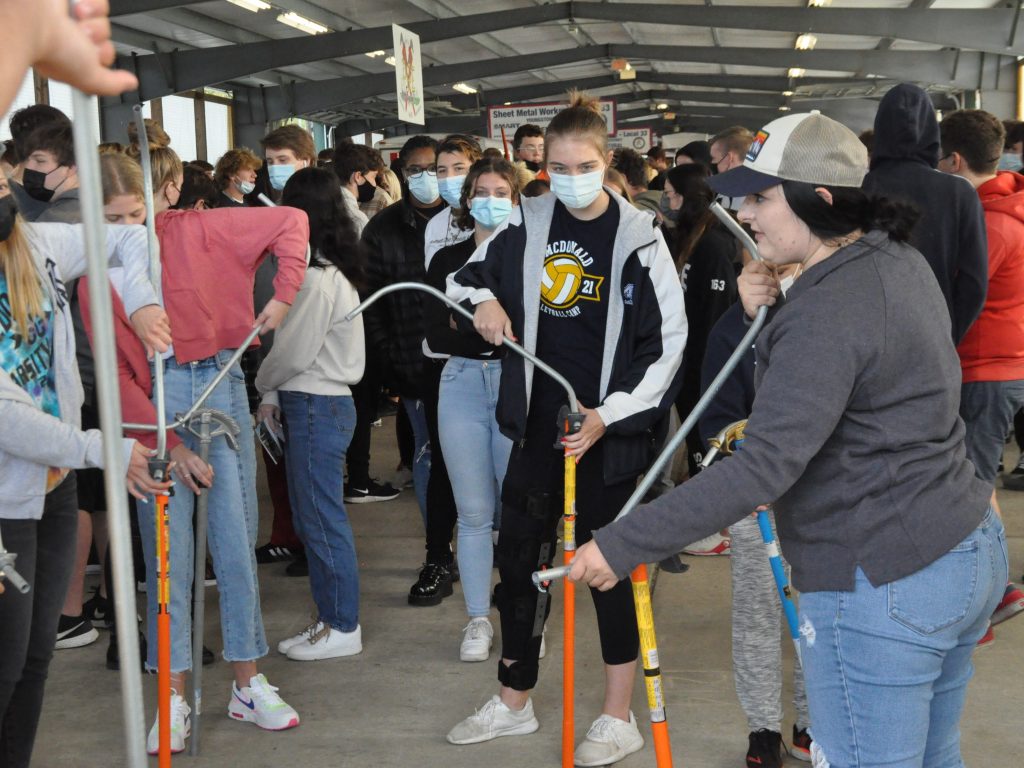 Reagan Seidel, a junior at McDonald High School, tries bending conduit at the Mahoning Valley Skilled Trades Expo in Canfield. After attending the event, Reagan said she will consider joining a trade after graduation.

A group of friends, Alicia Nitzsky, Cheyenne Arnio and Hayleigh Morgan, all juniors from Mineral Ridge High School, learned a little about the trades Thursday.

While visiting the electricians, Hayleigh said that bending the conduit was interesting, but also “harder than we thought.”

With help from apprentice Erin Pope and journeyman Will Collins, the trio was able to successfully bend the metal. 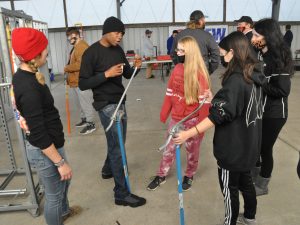 Will Collins, center, a journeyman with IBEW Local 573 in Warren, talks with students from Mineral Ridge High School about how to bend conduit.

After experiencing trades first-hand, all three said they’ll consider the trades after graduation.

Talking with students for the two days at the expo, Gintert stressed that anyone can join the trades without experience or knowledge.

“I wish I would have known you don’t have to know a trade to get into a trade. That’s what the apprenticeship program is for,” she added.

Apprenticeships are designed to teach students everything they need to know to be successful on the job, Gintert said.

All students need to do is show up and be willing to work.